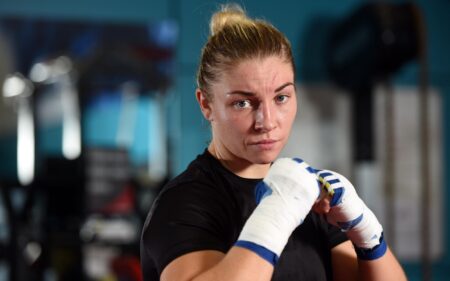 BOXXER’s Lauren Price has officially been handed her Member of the Order of the British Empire (MBE) for Services to Boxing in an official royal ceremony at Windsor Castle today.

It was the monarch’s first Investiture Ceremony since his Accession to the throne.

Middleweight Price, who was also a former kick-boxer and international footballer for her country Wales, has fought twice since turning professional in June earlier this year.

Price impressively stopped Timea Belik in front of a sold-out crowd at The O2 in October as part of the record-breaking first-ever all women’s card televised in the UK – viewed by an audience of over two million, making it the most-watched women’s sport event in Sky Sports’ history.

“Being recognised by His Majesty is one of the greatest honours any person can achieve.

“She is the standout star and we believe Lauren will go on to be an international superstar in the world of boxing.”