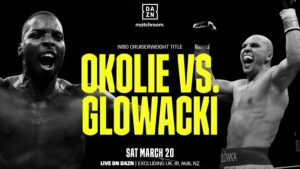 Fight Notes: Okolie was in command all the way, finally knocking out Glowacki in round 6. Time of the stoppage was 0:46.

Fight Notes: Score was  59-55 for a Scotney unanimous points victory.

Fight Notes: Ducar was down in round 4 close to the bell. Scores were 99-90 x2 and 97-92 for a Chris Bingham-Smith unanimous points victory.

Fight Notes: Score from referee Bob Williams was 60-55 for a Ali unanimous points victory over 6 rounds.

Fight Notes: Time of the stoppage was 2:03 of the 1st round for a Rea knockout victory. Bout scheduled for 8 rounds.