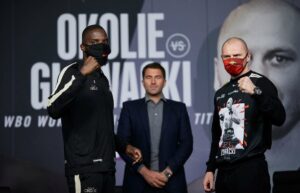 “Back in the UK, back in the London bubble here at Wembley ahead of a huge night of World Championship boxing this Saturday at The SSE Arena, Wembley, live and exclusive on Sky Sports in the UK and DAZN around the world. We have literally not stopped so far this year. It’s great to be back in London after watching one of the best fights I have ever seen in my life last week in Dallas between Estrada and ‘Chocolatito’. This week Lawrence Okolie goes for the WBO World Title against Krzysztof Glowacki. Next week we’re in Gibraltar for the big rematch between Dillian Whyte and Alexander Povetkin.”

“I think that everything’s all about timing. It’s been a good ride to get here, and I feel like it’s my time to go out there and become World Champion. There’s nothing for me to be tense about, I’ve done all the training so it’s just about going in there and getting it done.

“All the other stuff is extras, I’m here to enjoy my life to the best I can. In terms of boxing, Shane will tell you my training record shows I put 100% every day in the gym which is why I’m able to go out and do what I do.

“The most important thing is having self-belief. Every boxer believes in themselves, but I take it to another level. Some people call it arrogance, but I believe if you don’t believe in yourself wholeheartedly, you’re not going to be able to get onto a stage like this and still shine. I’m really excited about Saturday and do what needs to be done.

“I’ve done everything I need to do in training, so whatever eventuality happens, happens. However, in my mind, that’s not going to happen. I need to show that I’m a level above even though my experience isn’t necessarily there.”

“His only two loses are Usyk and Briedis, he has mixed it with the top boys. He spoiled the party when Al Haymon brought Marco Huck over and he’s boxed away from home a few times and has always put on his best performances. We have to be lively and on it.

“Lawrence was lucky to get out on December 12, get a run out and this weird atmosphere being inside the bubble – seeing your opponent on a regular basis. It’s going to be lively night, but hugely confident Lawrence will come away with the victory.

“Lawrence hasn’t been tested yet, and he’s not going to be tested until he’s in with the top boys. He’s flown through the amateur rankings, went to the Olympics, done his thing in the professional rankings and cleared everybody out. This is his biggest challenge but if he can blow out Glowacki he’s got to get his props. People haven’t really appreciated how good he is.”

Krzysztof Glowacki – Walcz, Poland – 31-2, 19 KOs – fighting Lawrence Okolie for the vacant WBO Cruiserweight World Title:
“This is a privilege for me, I will fight strongly and I’m very confident for Saturday night. Okolie is an undefeated fighter so I’m expecting a very tough fight. It will be a strong fight; we can guarantee it so you cannot miss this one.”

“I think it’s normal because when Glowacki was fighting for his title he was very self-confident, and experience was on our side, but we’ll see what happens. First of all, he [Krzysztof] will have to avoid those huge punches and then hit him hard. We’ll see how it goes.”