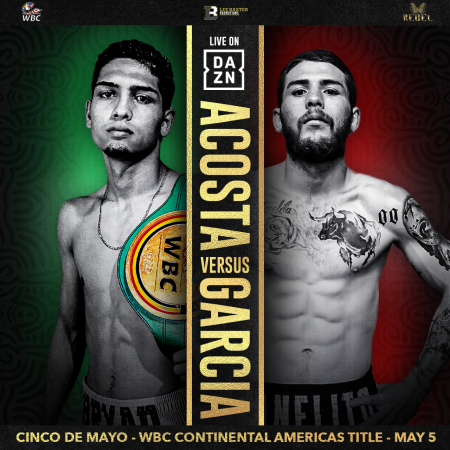 Lee Baxter Promotions is bringing Canadian boxing to DAZN for the first time ever, in a multi-fight deal. On May 5th – Cinco De Mayo – at REBEL Entertainment Complex in Toronto, Lee Baxter Promotions will present the first boxing show in Canada to be shown on the sports streaming platform. In recent years, DAZN has broadcast some of the biggest fights across the globe, from the United States and United Kingdom, to Japan, Mexico, Italy and Spain. Finally, Canada will be added to the list.

The event will be headlined by Bryan ‘El Latino’ Acosta (16-0 5KO’s) who faces Benito Sanchez Garcia (15-5-2 3KO’s) for the WBC Continental Americas Super Featherweight Title. Acosta made his Canadian debut back in March and is ready to give the fans another great performance to take home the belt. The 23-year-old is one of the most exciting prospects in Mexico and DAZN will give the fans a chance to see his eye-catching style. Backed by his trainer Jose Alfredo Caballero, and now DAZN, Acosta is looking to make a statement to the rest of the division on May 5th.

Cinco de Mayo is a part of Mexican culture and is celebrated in honour of the Mexican military conquering the French Empire, on May 5, 1862. Since the 2000s, the celebration has also become a popular date for boxing events with many classic fights happening during the celebration. Two days after the May 5th event, boxing superstar Canelo Alvarez will be continuing the Cinco de Mayo celebration on May 7th when he fights Dmitry Bivol, live on DAZN.

“With Acosta headlining the event we are ready to bring the Cinco De Mayo celebration to Canada,” said Baxter. “We’re proud to be the first ones to bring DAZN boxing to Canada, and honoured to be working with one of the premier broadcast outlets in all of sports. This is one of the best boxing markets in the world, and it’s always belonged on the biggest platform. With future stars like Bryan, we hope Cinco De Mayo can be a major fight week here in Canada for years to come.”

The co-main event on the night will be Lee ‘El Champo’ Reeves (8-1-0 6 KO’s) who boxes hard-hitting Mexican southpaw, Sebastian Diaz Maldonado (17-4-1 13 KO’s), for the NABF Junior Super Lightweight Title. Reeves made his professional debut in Toronto back in 2018 and now he’s back in Toronto hoping to win his first title as a professional. As an amateur, Reeves was two-time National Champion, seven-time Munster Champion and seven-time Limerick Champion. His highly decorated armature career led him to be tabbed by none other than Tyson Fury to be the next superstar of Irish boxing.

Tickets start at $67 and can be purchased on Ticketmaster. REBEL Entertainment Complex is located at 11 Polson Street, Toronto, Ontario, M5A 1A4. On the night of the event doors will open at 6:30 pm ET, with the first bell at 7:00 pm ET.

For those of you who can’t be in attendance, the DAZN Broadcast starts at 8:30pm ET.

Follow us on our social media accounts for updates on our fighters and events.