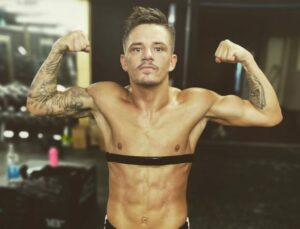 Lee McGregor is trying to stay positive as he knows he has what it takes to become European champion – following the news that his fight with Karim Guerfi would have to be postponed.

Following a ruling by the British Boxing Board of Control on Sunday, all boxing events throughout January have had to be cancelled due to the increase in COVID-19 cases in the United Kingdom and the effects such increases has on the NHS and the work of the Board Medical Officers.

It meant that the planned MTK Fight Night event on January 22 can not take place, which featured Guerfi vs. McGregor, along with fights such as Sean McComb vs. Gavin Gwynne for the vacant Commonwealth lightweight title.

While it is another frustrating setback, undefeated McGregor (9-0, 7 KOs) is remaining upbeat, and is pleased with what he has been producing during his training camp.

McGregor said: “I’m trying to stay positive because I’m seeing how I’m progressing in the gym. The fight being postponed in November the first time was a blessing, because of how I’ve been performing over the last few weeks.

“There are big improvements being made, and as much as it is frustrating and I’m gutted, I firmly believe I’ll become European champion when I face Guerfi. I just want to get in there and punch him in the face.

“This is a cracking fight and everybody wants to see it, so this is just delaying the inevitable for me. It will all be worth it when I eventually get to step through those ropes.

“Guerfi has been in with the very best and has never been dominated or outclassed. He’s been in competitive fights, so if I was to go into the fight and do what I think I’ll do, it will open a few eyes and answer a lot of questions.

“If all went to plan I think I’d go in there and dominate him and look like the experienced fighter. People will see that I’m well beyond the fights I’ve had, so my main focus is getting this fight on as soon as possible.”