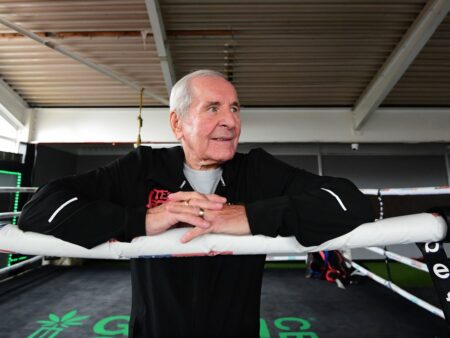 Legendary boxing trainer George Vaughan has announced his retirement from the sport after an illustrious career – spanning over an incredible 60 year period.

Vaughan’s career in boxing training started with Lee Jones before then moving onto the Rotunda, and it didn’t take ‘Georgie’ long to achieve positive results, having an immediate impact at the club.

His success as a trainer began when he won everything possible at a national level, having schoolboy, junior, and senior champions at the ABAs, making it clear from early on that Vaughan was a special talent when it came to boxing training.

He trained thousands of fighters across Liverpool, and went on to become an England international coach, with the highlight coming in 1980, when he coached fellow Scousers Joey Frost and Tony Willis at the 1980 Olympics in Moscow, with Willis taking home the bronze medal.

Vaughan continued to work around clubs in Liverpool, winning everything possible time and time again, before he then became a professional coach, with even more fantastic success to follow.

He trained some of the very best fighters that Liverpool has ever seen, including the Smith Brothers, Derry Mathews, Jazza Dickens, Andy Holligan, Gary Thornhill, Peter Culshaw and more, with Vaughan instilling his vast knowledge onto them and helping them go from strength to strength in their respective careers.

It wasn’t just fighters that Vaughan helped to get started in the game, with a number of boxing coaches also crediting the Liverpool legend for getting them started in boxing, including former Team GB coaches Paul Walmsley and Jimmy Albertina, along with Australia coach Kevin Smith.

Vaughan’s excellent commitment and service to boxing made him universally respected throughout the sport, with his no nonsense attitude in the gym allowing fighters to reach their full potential, whilst also helping to get kids off the street and give them a better life.

He was always ahead of his time and never money-motivated, with his passion and love for boxing being the drive force behind Vaughan’s success, leading to him winning an array of belts as a trainer, including the British, Commonwealth, European and more.

His proud ties to Liverpool will be ingrained into history forever, winning six British titles with Scousers throughout his tremendous career as a trainer, along with the WBU title with Derry Mathews whilst it was a fully recognised belt.

Mathews was one of the fighters Vaughan was closest to, along with Jazza Dickens, and the pair have both paid tribute to their hero for what he has done for them.

Mathews said: “Where do I start and where do I finish. Everyone knows what George means to me. He means the world to me and I still speak to him daily and will still see him daily.

“For the last 20 years I’ve spoken to him every single day, and what he’s done for myself and my family, you couldn’t buy it. He’s my inspiration, my best mate, and my gaffer.

“He’s a very special person and a one off. It is amazing the stuff he has done for people in the boxing world. Not just champions, but kids on the street. He’s got people to the Olympics, helped them win ABAs, British titles and world titles.

“He treats everyone the same, there is no special treatment for anybody. It has been an honour to be under his wing and his number two in the gym. I’m a very proud person and I’m proud of him.

“I’m lucky that I only live around the corner from him and can visit him daily, and can get advice on the fighters that I’ll be bringing through. It’s a sad time that he’s leaving us, but he’s given us all some of the best times in boxing.

“In the city there should be a statue for him, as there is nobody in Liverpool that he hasn’t trained. He’s a legend, and there’s nothing more I can say. He’s the gaffer, the master. There isn’t a world to describe how powerful he is. He’s loved by us all.”

Dickens said: “My time with Georgie were the best years of my life. Boxing or not I’m honoured to have shared it with him. His work ethic, resilience, dedication and commitment can only be admired.

“If I could retire with a reputation anything like his I would be a happy man. I love working with him but the time I get to spend outside of the gym is priceless.

“Not everyone is lucky enough to know that side of George, if he chose to show the media what he shows his friends and family he would be a star. I’ll be forever grateful to say I know Georgie Vaughan the coach, the man, and the friend.”

Georgie’s legacy in boxing now continues through his son, Danny Vaughan, and his grandson, Dominic Vaughan, who are both respected trainers in their own right, as they look to make Georgie proud and keep the Vaughan name going, with it dating back to the 1800s in the sport.

Vaughan now retires at the age of 83 after dedicating his entire life to the sport, but he will always be respected and loved for helping to better the lives of people for over 60 years. Thank you to The Master.