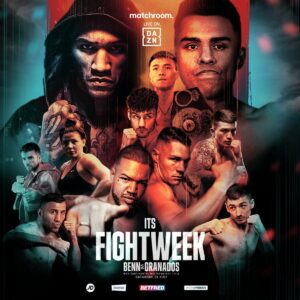 Can Xu vs. Leigh Wood Result

Fight Notes: In a fight where Wood was the underdog and on short notice, he came out and took the fight to defending champion Xu. Wood seemed to boss the fight though the rounds were hard to judge, depending on if you favour volume or precision.

The general feeling was that Xu was going to take over in the second half of the fight, but this never happened. In the 12th round, Wood knocked Xu down and followed up until the referee stopped the bout. Time of the stoppage was 2:43 of round 12.

Leigh Wood, the new WBA featherweight champion of the world!

Fight Notes: Hatton was in control throughout the 4 rounds, showing improvement with his stamina over the distance. The score from the referee was 40-36 for a Hatton points victory.

Fight Notes: Fowler was in full control throughout the 8 rounds against late substitute Rico Mueller from Germany. The referee finally stopped the bout at 2:12 of the 8th round with what could be deemed a late stoppage.

With the win, Fowler will next fight former world champion and fellow Liverpudlian Liam Smith in Liverpool on October 9th.

Fight Notes: In a competitive bout, Cullen showed that there is life after defeat as he outpointed the former world title challenger by scores of 100-90, 98-92, 97-93 and is the new IBF International Super Middleweight Title holder.

Yildirim was on the front foot for most of the fight Cullen effective with the jab with some excellent in-close work in front of an international audience. It was a great win which will give him a good world ranking.

Fight Notes: The bout went the 6 round distance with Ryan winning her professional debut by a score of 60-54. Referee was Mark Bates.

It was a good debut with Ryan in control from start to finish, showing a great variety of punches, catching Bavington with some superb punches along the way. Bavington for her part was game throughout and competitive.