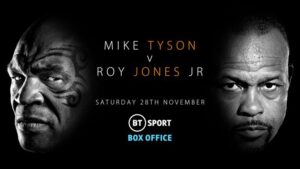 “I think it’s an interesting fight. They’re doing it for charity – that’s a good thing. I didn’t feel like we’d ever see Mike Tyson back in the ring. I thought he was very happy doing his other businesses around the world, being a movie star.

“Everybody loves Mike Tyson. Everybody loves Roy Jones. They just want to see them in the ring again. It’s not a bad thing. At this age I actually think it’s good that he can push himself to step back into the ring.

And who could win? Lewis could see either boxer pulling it off – but he cautions that ring size could play a big role in the strategy as Jones will be the quicker man on his feet.

“You have to remember how Roy Jones is. Roy Jones is one of the quickest fighters out there. He moves around the ring. He’s not going to be an easy target.

“This type of fight he’s not looking to get hit. And I’m sure it’s going to be a big ring so until Mike Tyson catches up with him, if he can catch up with him, we’re going to see a good fight.”