Leon Bunn vs. Padraig McCrory on Oct. 22 in Frankfurt for IBO Title 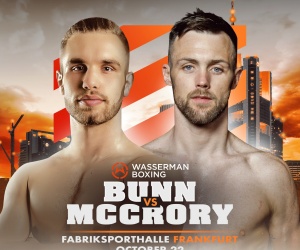 Light heavyweight contender Leon Bunn will have to wait an additional three weeks before finally receiving his long-awaited world title shot! After his original opponent, Daniel Blenda dos Santos, had to pull out of the fight due to an ankle injury, the highly anticipatedevent presented by Wasserman Boxing in association with Probellum at the Fabriksporthalle in Frankfurt, Germany, has been rescheduled for October 22. Tickets bought for the original date of October 1 will remain valid.

A new opponent for 28-year-old local hero Leon Bunn has already been found: He will now face unbeaten power-puncher Padraig McCrory from Ireland for the vacant IBO World light heavyweight championship. McCrory, called “The Hammer“, is unbeaten in 14 fights, with 8 big wins by way of knockout, and was scheduled to fight for the EBU-EU title on October 22 in Belfast. However, when the opportunity to fight for a world title came along, he immediately jumped at it.

The undefeated Leon Bunn is unmoved by the change of opponent and date, saying, “I’m glad that we found a new opponent so fast. I have great respect for Padraig McCrory and I certainly won’t overlook him. However, my goal is set in stone: On October 22, I will become champion of the world in front of my fans in Frankfurt – and nobody will stop me! I can’t wait to enter the ring that night.“

Padraig McCrory does not lack confidence either, as he is predicting a knockout win on October 22: “I’m relishing the opportunity to become the IBO World champion, fighting in Leon Bunn’s backyard adds an extra fire in the belly and will make the rewards of winning this title so much sweeter. I’ve seen plenty of Leon Bunn, he’s a really good boxer, but I don’t think he can take my power for 12 rounds.“

Promoter Kalle Sauerland is expecting an exciting and action-packed showdown in Frankfurt: “After dos Santos’ injury, we knew that we had to postpone the event in order to find a suitable opponent for Leon. We did! It’s a big, big chance for Padraig McCrory, he can become world champion. He’s unbeaten, he’s powerful, he has that Irish mentality and all of that makes him a very dangerous opponent. Leon has to be at his absolute best to win the world title in front of his fans on October 22.“

Jamie Conlan, a former world title challenger himself and manager of Padraig McCrory, is confident in his fighters’ ability to return to Ireland with the IBO belt around his waist: “We where planning and preparing for the EU title but this opportunity came up and Pody jumped at it. I totally believe going into the Lions Den will bring out the best in Pody McCrory. Leon is a very good, accomplished boxer and Pody has knockout power in either hand, both guys come in undefeated with great confidence and I believe it will be a very entertaining fight.“

Tickets for the IBO World light heavyweight championship between Leon Bunn and Padraig McCrory presented by Wasserman Boxing in association with Probellum on October 22 at the Fabriksporthalle in Frankfurt, Germany, are on sale now and can be bought via Eventim.