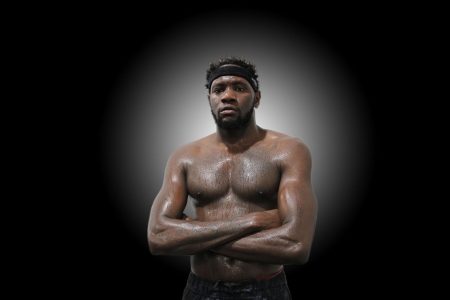 Lester Daniel is looking to strike a balance when he attempts to make it a hat-trick of pro victories some two-and-a-half years after turning pro.

He made his debut in March 2020, piling the pressure on opponent Gianni Antoh, who withdrew in the fourth and final round with a groin injury. Antoh hasn’t boxed since.

Southpaw Daniel had already floored him, in the third round before his adversary retired at the end of the session, having been in the wars.

The left-hander would not be back in action for another 28 months, largely due to the pandemic, and returned to outpoint Callum Ide on July 30.

The 29-year-old light heavyweight, from Bedford, was in control to register a points success over Ide, due to a 40-36 scoreline. Both contests took place at the Dunstable Leisure Centre.

In the meantime, Daniel changed coaches, from his amateur mentor Carl Hazlewood to James Conway, now training out of the Team Shoe Box gym in Northampton.

He was born in Nairobi, Kenya, before moving over to the UK as a teenager, although he didn’t set out on an amateur boxing career until he was an adult.

He said: “I was good to be out last time and get some momentum going again and it was a decent performance from me, but I could have done a bit better.

“For the time that I had off, I didn’t feel off the pace, but I could have made it easier for myself, at times. It’s difficult when your opponent is not engaging.

“I had to keep chasing him around and when I was working, he was moving away and covering up, so I had to force openings, rather than waiting to see them.

“He was a tough cookie, though, so fair play to him, but he didn’t land a clean shot. It was a comfortable win for me, but I don’t feel like I need to get those shorts of scrappy rounds in.

“On my debut, at least the guy came to fight, rather than just survive. That was much better. I had a good introduction to the pro ranks.

“I felt like I was busting him up and then he told the referee he was injured and couldn’t go on. Either way, I think I’d have stopped him later on.

“I’ve only ever lost once, boxing in England, and I don’t plan on losing again, anytime soon. I want to be pushing, all of the way, towards achieving something.

“For now, I just want to get another one under my belt and put the things into action that we’ve been working on in the gym. I want to show my work-rate and that I’m a tidy boxer.”

Tickets for the Park Inn bill are available, priced at £40 for unreserved seating or £75 VIP ringside with buffet, directly from the boxers or by visiting myfighttickets.com.

A change is as good as a rest for Dempsey Madden Yokasta Valle vs. Thi Thu Nhi Nguyen final press conference quotes