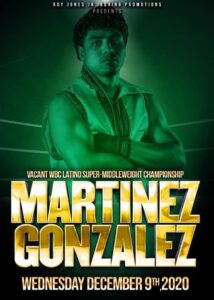 Fight Notes: Gonzalez was down but beat the count and was seemingly ok but the referee stopped the fight. Time of the stoppage was 3:00 of the 1st round. The unbeaten super middleweight destroyer is best known for knocking out Ricardo Mayorga on Martinez’s professional boxing debut.

Fight Notes: Solis was a 6-time Mexican National champion as an amateur and remained unbeaten with this win.