Lewis Crocker: This is My Toughest Test to Date 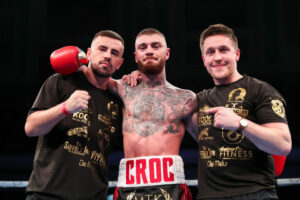 Lewis Crocker is relishing the tough challenge in front of him as he prepares to take on Deniz Ilbay on Friday’s huge #MTKFightNight.

Undefeated Crocker (12-0, 7 KOs) puts his his WBO European welterweight title against Ilbay (22-2, 10 KOs) at the University of Bolton Stadium, live on ESPN+ in association with Top Rank, and worldwide on IFL TV.

It’s the first defence of the title that Crocker superbly won last August, and the Belfast man is excited to test his skills against a dangerous opponent.

Crocker said: “I’m delighted that I’m fighting again and it’s great to get back in the swing of things. Starting 2021 with a big fight is just what I wanted.

“Ilbay has won several titles and has been in there with world class opposition, so I’m expecting my toughest test to date. My mindset hasn’t changed whatsoever, I’m still as hungry as ever and I definitely don’t plan on losing my belt.

“Headlining another show back to back is quite special, and it’s all good experience for me and my progression throughout my career. Training has been great and all the boxes have been ticked.

“This Friday it’s just about going in there and putting on a good performance. The plan is to win this fight, and then add more titles to my resume and remain unbeaten.”