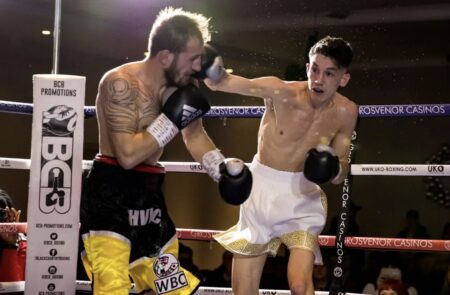 Liam Davies is more than willing to go through Dennis McCann to prove that he’s the best bantamweight in Britain.

English champion Davies is next in action at the Utilita Arena in Birmingham, as part of a BT Sport televised offering, this coming Saturday October 9.

McCann is due to box at the same venue the following month, with both of them signed to promotional deals under Frank Warren’s banner.

Davies, who is managed by BCB Promotions, has set his sights on McCann and the British bantamweight title, which is currently held by Lee McGregor.

That belt might yet become vacant, with McGregor also being the European champion and Kash Farooq, the next in line to challenge him, already in possession of a Lonsdale belt.

McCann is considered to be the hot prospect of the division, but has yet to compete for a title as a pro. His record currently stands at a flawless 10 wins from 10 outings, with six TKOs.

The second-generation fighter, who is from Telford, is the son of ex-pro Tristan Davies and represented his father’s Donnington Boxing Club as an amateur.

He racked up exactly 100 amateur contests, coming out on top 78 times, and was an ABA Schoolboys national champion in 2010. He went on to represent England at youth level.

The 25-year-old is entering the prime years of his career, with Warren’s influence more than likely to bring McCann into the equation.

Davies said: “I’ve only been with Frank (Warren) for a few months and this is my third fight under him. He’s on about getting me on again before Christmas, too.

“I’ve had back-to-back stoppages, too, so let’s see if I can keep that up! Every time I’m on TV is a chance for me to impress and things are looking good.

“It’s one thing being signed to Frank, it’s another to be on his live shows and I just want to carry on taking the chances that he’s giving me.

“It might seem that it’s happened quickly for me but, if I’m honest, I am where I thought I would be, so I just want to keep building myself up. I’ve got a lot more to prove.

“It’s great to be the English champion, but I would fight anyone to get the British title and that includes Dennis McCann. I think it’s inevitable that we will cross paths, let’s hope it happens.

“He’s not very wise if he picks me for his first test, because that’s what it will be if you look at his pro record. I’ve been to places that he hasn’t, amateur and pro.

“I’ve been fighting stronger men for years, since I was a senior in the amateurs. I could have turned pro, at 18, and took the easy option.

“Dennis came through at youth level and then straight to pro. To me, he’s never really had it that hard in there. I’ve seen him at very close quarters.

“He boxed my brother (Bradley Thompson), as an amateur. I was glued to the ring, so I know what he’s all about. He is good, he wouldn’t have beaten Brad otherwise.

“I think it will be a different story against me. I’ve already won the English title, on 18 days notice, in my first fight on television having never been 10 rounds. That put me on the map.

“Let people call him the favourite, I’ve had it that before and come away with a win. That’s the difference between us, I’ve already proved myself as a domestic contender.

“If it’s me and Dennis for the British title, the sooner, the better. I could do that and then move up the weights. I’m a massive bantam, big enough to fight at feather.”

Before that possible date with Dennis; Davies must overcome a former world title challenger this weekend.

It’s a step up for Davies but one that he is confident of overcoming.

“”I respect Flores because he’s been in with some top class fighters,” he added. “He’s fought at a good level and has a winning record. He’s a live opponent but one I’m confident of beating.

“I’m looking forward to getting that strap around my waist and moving forward.”

Davies versus Flores is part of a bumper night of boxing at the Utilita Arena in Birmingham.

Lichfield’s Brad Foster faces Jason Cunningham for the British, Commonwealth and European Super-Bantamweight championships at the top of the bill.

The show will be aired live on BT Sport and tickets can be purchased at frankwarren.com and theticketfactory.com.