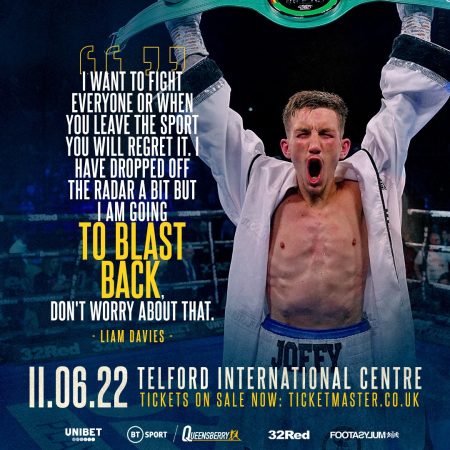 Liam Davies believes a big domestic duel with Andrew Cain remains on the cards despite injury scuppering  a scheduled collision in April.

A shoulder injury put Davies out of contention for the Telford date and Cain went on to seize the WBC International Silver title with a 20-second destruction of Pablo Ariel Gomez.

Being in his home town and with his brother (Bradley Thompson) also on the bill, Davies was in and around the fight week scene, leading to a frosty exchange with Cain following the weigh-in.

On June 11, again in Telford at the International Arena, it is Davies’ turn to be in big fight action when he challenges Marc Leach for the British super bantamweight title.

“It was a sickener,” said Davies on being forced to withdraw from a fight with a former amateur rival. “But it is one of those things, you have knockbacks and hopefully that was the end of mine because I kept training and sometimes it is hard to stay motivated.

“I have done, but it has been tough and we are there now, finally. My shoulder is good and I’ve got the okay from the hospital.

“My shoulder was hurting me for a good while. I stopped punching and then I would try again and it was still hurting. I went to the physio, who referred me to the hospital, so I went to the Princess Royal and had an MRI.

“It was my AC joint that was jarred and there was a lot of inflammation, so they gave me an injection. Once you have been to the hospital it goes on your medical records that go to the board, who then speak to the doctor who said I was not okay to fight until a certain time.

“I’ve had physio and it has been better since the injection, but I just had to have a few weeks with no punching and doing all the boring stuff. It has been a bit of a nightmare.”

Davies insists he had no reservations over fronting up to his rival Cain, who had a few choice words for his original opponent.

“I didn’t mind it. I knew what they were gonna do when they asked me to go and I wasn’t going to shy away from it. It is just a fight and a good fight when it happens.

“I see I got a bit of a slating for saying I had hurt myself but these people don’t understand boxing. You can’t just make up an injury because letters and stuff have to be sent to the board, so you can’t have no proof. I’d show everyone, but not everyone needs to know.

“I knew he would be like that because that is what he is like. It was good and it sells the fight, doesn’t it? Even if he goes to bantamweight it is not far off in weight difference.

“It will happen. I know it will happen. I want to fight everyone or when you leave the sport you will regret it. I have dropped off the radar a bit but I am going to blast back, don’t worry about that.”

There are some tickets remaining for the show at Telford International Centre on Saturday, 11 June available from Ticketmaster.co.uk.

WATCH the British title double from Telford followed by Trevor Bryan vs Daniel Dubois on Saturday from 7pm live on BT Sport 1.