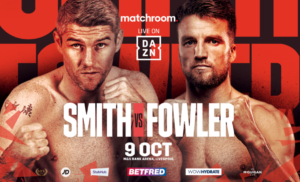 The two men will go head to head on a Matchroom Boxing show at the M&S Bank Arena in Liverpool on October 9, live worldwide on DAZN.

Smith (29-3-1, 16 KOs) was last in action in May, suffering a controversial decision loss to undefeated Magomed Kurbanov in Russia, but will now look to return to winning ways against Fowler.

Fowler (15-1, 12 KOs) was victorious at Matchroom Fight Camp on Saturday, stopping Rico Mueller in the eight round to make it six wins in a row since his defeat to Scott Fitzgerald in 2019.

A victory for Smith should set him on the right path to get back in world title contention, as he looks to again claim world honours after previously holding the WBO super-welterweight title from 2015 to 2016.