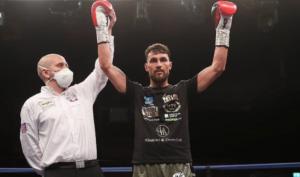 Liam Taylor returned to the ring in style on Saturday as he picked up a first round knockout victory over Tommy Broadbent.

The fight took place on a Black Flash Promotions show at Victoria Warehouse in Manchester, with Taylor (23-1-1, 11 KOs) wasting no time whatsoever, flying out of the traps and landing great shots on Broadbent.

A crippling body shot sent Broadbent to the canvas towards the end of round one, and while he was able to get back to his feet, another crushing body shot followed moments later, with Broadbent unable to recover, giving Taylor a brilliant stoppage victory.

It has seen him continue his fantastic form as of late, with his previous bout last August resulting in a win against previously unbeaten Darren Tetley in what was a fight of the year contender.

Some huge fights could now be on the horizon for Taylor, with him potentially in line to take on European welterweight champion David Avanesyan later this year.