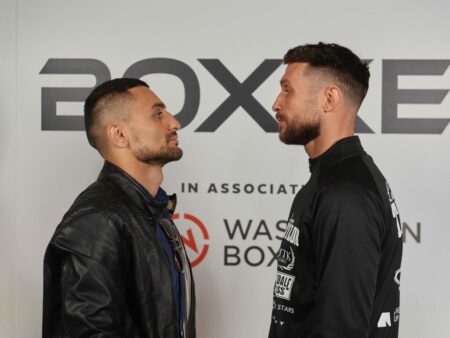 Liam Taylor and David Avanesyan exchanged plenty of words as they took part in their final press conference ahead of this weekend’s European welterweight title clash.

The two men spoke in front of the media on Thursday, and both of them made it clear that the fans should expect an all-action affair.

Taylor said: “I’ll fight anybody. I’ve worked hard to get into this position to be mandatory. David is a world class fighter, but this is just another fight and I’ve prepared well. This is the right fight for me.

“I truly believe I’d have beaten Josh Kelly like David did. Kelly was a really good amateur, but as a professional he hasn’t grasped it yet. You’ve got to work for 12 rounds, and he gassed after a few. David fought well and broke him down, but I’d have done the same thing.

“Our styles will gel well into a good fight. He’s a stand up boxer and likes to come and fight, but I’m not afraid to have a fight as well. This will gel really well for the fans. I don’t like taking a backward step.”

Avanesyan said: “I have worked hard, and my team have worked hard to get me the fights. It is not my problem or my fault that I am avoided, but now I have Liam Taylor which is good news for me.

“I’ve been training a lot, and on Saturday I hope everything goes well. I hope to have the same performance as I did the last time against Josh Kelly. I am coming to win. I feel good with no injuries, and we’ll give a great fight for the fans.”