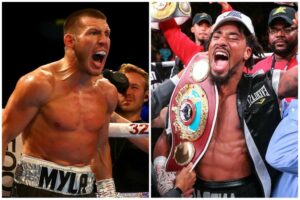 Liam Williams will finally get his chance to become world champion after a deal was agreed for him to face WBO middleweight champion Demetrius Andrade.

Purse bids were set to be held for the highly-anticipated fight on Wednesday, but a deal was reached between the two fighters prior to the bids taking place.

Williams (23-2-1, 18 KOs) has been in sensational form since moving up to middleweight, with all five of his fights in that division ending in knockout wins.

He won the British middleweight title with a stoppage win over Mark Heffron, before following that up with two successful defences, knocking out Joe Mullender and Andrew Robinson.

Williams has also made an impact on the world stage during that time, knocking out Karim Achour and Alantez Fox in 2019, with both of those men never being stopped before facing the Welshman.

Andrade (29-0, 18 KOs) won the belt after it was vacated back in 2018, defeating Walter Kautondowka to become champion. Since then, he has made three successful defences, beating Artur Akavov, Marciej Sulecki, and Luke Keeler.

News on a date and location for the fight between Williams and Andrade will be announced in due course.