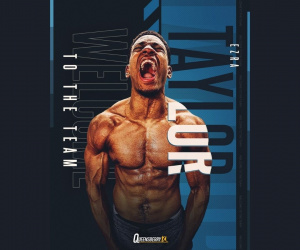 Taylor, 26, won a string of regional amateur titles but is now chasing bigger belts in the professional ranks, and believes he has the platform to achieve that.

His only professional fight was in March 2020 when he stopped Jevgenijs Andrejevs inside two rounds.

Taylor is trained by Ray Ricketts who coached him as an amateur at Bilborough Community Boxing Club and managed by former professional Costas Evangelou.

“Costas pulled the strings and put a good word in for me. I’m guessing Frank’s guys did their research and after a few meetings a deal was signed,” said Taylor who will box on a Queensberry show in July.

Thanks to sponsors, Taylor is now a full-time fighter and recently left his job as a sales account manager.

Ezra whose boxing heroes are Roy Jones Jr and Andre Ward added: “I was selling a dream to people, now I have bought the dream I have been sold.

“This is fantastic opportunity and I have some great people behind me. I will give it everything that it takes.

“In the first year I want to get as many fights as possible behind me adapting to what it is like when the pressure is on as a professional.

“Hopefully I will be build myself up, challenge for titles, win them and move on to the next one until I reach the top.”

Taylor first walked into a boxing gym in his early teens, but never expected to even compete as an amateur let alone earn a professional contract with a Hall of Fame promoter.

He explained: “I started when I was about 14, but I was only going to the boxing gym once a week to keep fit.

“Eventually I had to spar with guys who lived boxing, were in the gym most nights and competing as amateurs. I started getting beat up.

“I just wanted to be fit, fling a skipping rope around and tell my friends I was hitting the bag in the boxing gym.

“I lost interest, but still used a gym and eventually I got a bit of height and muscle. I went back to the boxing gym when I was 19-years-old, again for fitness and the rest is history.

“I was 20-3 as an amateur, my only losses came at elite level and I won five regional belts, but I was stepped up quickly because I was a late starter.

“It was a tough amateur career. Four fights in I was fighting guys who had 20 fights and that’s a lot in experience terms.

“On paper, I was meant to lose but I kept the momentum going and ended up in the elite championships early on.

“I’m grateful it happened because a lot of these kids have about 70 fights and it wasn’t a walk in the park. It made me the boxer I am today.”