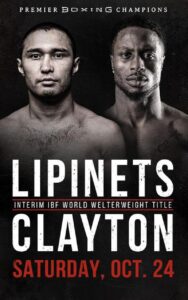 Fight Notes: Scores were 115-113 Clayton, 114-114, 114-114 making the bout a majority drawer. The interim title remains vacant. According to CompuBox, Lipinets outlanded Clayton to the body by an 80 to 29 tally, while Clayton had the superior jab to the tune of 135 landed compared to 68 from Lipinets. Lipinets was the IBF no.3, Clayton no.5 with Clayton coming into the fight at short notice.

“I thought I won the fight, but Clayton is a good fighter,” said Lipinets. “He was stronger than I thought he’d be. I haven’t fought in a year and it shows. I need to get my rhythm back in a couple of fights before I face the top level fighters.”

“At the end of the day, you can’t knock the judges’ decision, but I thought that I landed the cleaner shots and won,” said Clayton. “He came forward a lot, but he wasn’t landing as much. I probably could have pushed more a little earlier, but at the same time, I knew he was strong. I thought I stayed patient and poised. I could have put combinations together quicker, but overall I thought I fought a smart fight and pulled it off.”

“I showed the world that I’m not just a guy from Canada,” added Clayton. “I proved I’m a good fighter. People will have to respect me a little bit more. If Lipinets wants the rematch for the interim title, we should be able to make that happen.”

“For the interim title, I’ll be ready for a rematch with Clayton,” added Lipinets.

“To be honest, it was weird when I got knocked down,” said Martinez. “I just said, ‘Let’s get back up.’ Losing wasn’t on my mind. I just thought I have to get up. I’m not happy I went down but it’s all an experience. A lot of guys wouldn’t have fought Claudio. He was tough. But I rose to the occasion and I proved something to myself.”

“I feel like it was a bad decision,” said Marrero. “I don’t think the judges took into account all the hard work I did in the ring. I wouldn’t do anything different if I fought him again. I would fight the same way. I fought smart and I put pressure on him. He hits hard, but I recovered quickly. I felt like I won the fight.”

Fight Notes: Hawkins could not continue after round six with the official time was :01 of round seven. This could of gone down as a stoppage at 0:01 of round seven but BoxRec have it recorded as RTD 6/10 so we follow suit. The bout was made at super lightweight and was scheduled for ten. Hawkins lost his unbeaten record and Hawkins was down in round six.

“I’ll fight anyone,” said Matias. “Whoever they put in front of me, it doesn’t matter. I want a title eliminator, and then I want to fight for a world title.”