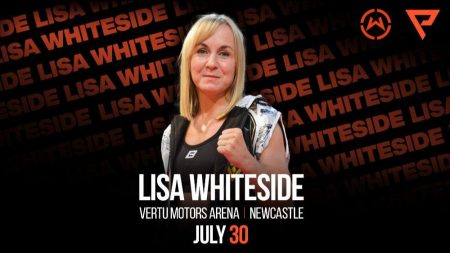 Lisa Whiteside rejected out of hand the idea of having an easy comeback fight as she prepares to return to boxing after almost three years out.

Whiteside had three professional fights before stepping away from the sport to focus on having her first child and turned down lesser opponents before agreeing to fight Nad, later this month.

Nad’s record includes fights with Probellum’s world bantamweight champion Dina Thorslund and Segolene Lefebvre, who won the super bantamweight title in her next contest after facing the Serbian, last year.

And such is Whiteside’s desire to move as quickly as possible to world title fights, the 36-year-old had pushed to box over the 10 round championship distance on her return at the Vertu Motors Arena.

“My team want to fast track me, and my opponent is a decent girl and though she’s not got a winning record, she’s had 40 fights, she’s never been stopped, and she’s been in with a number of current world champions.

“We turned away a couple of names, I don’t want to name them, but they are journeywomen, and I would’ve stopped them in a round and it wouldn’t have been of any benefit to me. I hope I can get something [a title fight] by the end of the year.”

Whiteside makes her comeback at super bantamweight, but she is open to fighting at both bantam and featherweight too.

“I hope I can go out there and put on a cracking performance in Newcastle,” Whiteside added.

“With my coach, Mick Day, we have added things to my game, but I’ve not changed who I am as a boxer. I’m an aggressive counter boxer.

“I’ve got that nastiness and I know I’ve got that power and even more so at this weight now because I’m not depleted down. The pressure is on, I’ve been out for three years, and you worry about the ring rust. It might take me a round or two to warm into it, but hopefully not.”