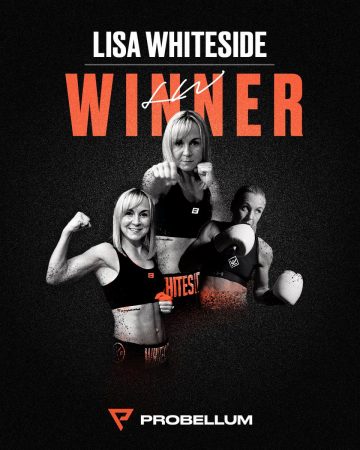 Lisa Whiteside marked her long-awaited comeback by flooring Jasmina Nad as part of a blood-stained battle in Newcastle.

And the 36-year-old, boxing for the first time in almost three years, says her comeback victory at the Vertu Motors Arena tonight has put the super bantamweight world champions on notice.

Whiteside defeated the experienced Nad 60-53 after six rounds on the Wasserman Boxing show, dropping the Serbian in the opening seconds of the contest.

The former Great Britain amateur survived a nasty cut above her right eye to secure the win – requiring six stitches afterwards – but Whiteside was in firm control and says she’s ready for the best in the division.

“She’s a tough girl, but we knew that, and that’s why we took the fight with her,” Whiteside told Probellum.com.

“I hit her with some serious backhands and I could feel the power, but she was relentless.

“She’s never been stopped, she’s had 40 fights, she’s been in with some top opposition, she nicked rounds from the French champion Segolene Lefebvre in her last fight, and I’ve just beaten her 60-53, with the knockdown in the first.  That puts a warning out there for other super bantams.”

Whiteside had no interest in steadily working her way into the fight, after such a long spell out, and piled on the pressure from the opening bell, culminating in the early knockdown.

“I dropped her with a lovely backhand in the first round and that felt awesome.  I don’t think she’s ever been dropped before.  It was a cracking experience.”