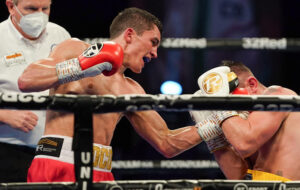 THE FEATHERWEIGHT WHIRLWIND Louie Lynn is determined to press the fast-forward button on his title-winning ambitions after collecting his first belt on Saturday with victory over a steely Spaniard.

Lynn, 9-0, took home the WBC International Silver title following a hard-fought win over Sebastian Perez at the Copper Box in a gritty encounter where the 25-year-old – known as ‘Loco’ – was forced to apply the brakes and ease off the pace due to the relentless nature of Perez’s assault.

The Peacock Gym protégé started in a typically fiery fashion looking to swiftly take out the Spanish invader, but he soon realised that he hadn’t really swatted up or done his homework on the EU-import.

“Perez was a very, very tough opponent and I’ve got a lot of respect for him,” said the Banstead-based Lynn. “He just kept coming all night long and he was like a little tank who wouldn’t leave off. He is a good fighter, who can punch a bit as well.

Lynn admits he imagined his trademark typhoon right from the first bell would be enough to account for Perez and deposit a first belt in the bank.

“To be honest, I did. I am usually confident that I can hurt people with my power and I have a trust in my fitness. I believed I could get him out before realising he wasn’t going anywhere.

“It is a bit disheartening and, at the end of the third round, I turned to Martin (trainer, Bowers) and said I was a little bit tired and worried I had emptied the tank in trying so hard to finish him. It was not having much effect so Martin just told me to box him.

“The penny sort of dropped that I wasn’t about to hurt him anytime soon!

“It is hard for me to take down the pace because I am so hyped and fired up to try and get the stoppage. The fact he was coming on to me all the time made me want to let my hands go even more.

“I’ll be honest, I was a bit ignorant going into this and didn’t even realise he had been in with and beaten guys like Ionut Baluta. I did look at his record and seen he won a European title, so he would be quite serious, and I watched two rounds of him and thought ‘he is short, stocky and keeps coming forward’.

For Lynn, it is now a lesson learned.

“I think so and I am happy it went the ten rounds so I know in myself that I can go the distance, especially against someone who is always dangerous. They were hard rounds and I needed to empty the tank in every one because he gave me no rest at all.

“It was the hardest fight of my life. I think it was Roman Gonzalez who said you must train hard and fight harder and it is true. You have to dig deep and find more and more.”

Whether by interrogation or design, the name of British champion Leigh Wood featured strongly in post-fight conversations with the media.

“I want that fight,” confirmed Lynn. “Straightaway if possible, I am happy for it and it is why it is good I have got this experience now and know I can perform when backed up and under pressure.

“I know I can do it now and I don’t think many fighters in the country are as tough as Perez and would keep coming and take my shots.”

Lynn was a little concerned he had jumped the gun in essentially calling out the Nottingham man without prior consultation with the man who would rubber-stamp such a move.

“I’ll be honest, I said to Martin after that maybe I shouldn’t have called him out, but he said ‘no, don’t worry about it, it is our belt anyway and he is just looking after it for us’. I said ‘yeah!’

“I believe it is a matter of time and we are on our way now. I haven’t got to stress too much and Frank will get me more title fights and more hard fights. It is only going to get tougher now.”