Louis Isaacs: He’s going to get taken out (Dan Morley) 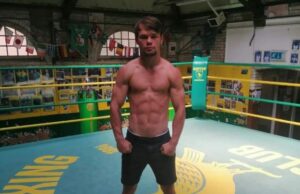 Louis Isaacs is super confident and in no mood to mess about ahead of his bill-topping slot at London’s famous York Hall on Aug 7 on a card promoted by Mo Prior, in association with Fight Academy.

The unbeaten Islington fighter gets his first real test as a pro when he takes on Epsom’s Dan Morley in an eliminator for the Southern Area Welterweight Title, live on Fightzone.

Watch this fight and many more by subscribing to Fightzone below . Great weekly boxing – just £4.99 a month

Both aged 24 with a perfect 6-0 record; on paper it’s hard to split the pair … but that’s not how Louis is eyeing the encounter. A former London amateur champion with over 50 wins from 75 bouts, the Londoner says he is on a different level to Morley and predicts an early finish if his opponent turns up for a fight.

“I’ve seen little bits of him, but I didn’t know him from the amateurs because he didn’t have that many fights, and our paths never crossed,” explained Isaacs, a full-time pro who used to be trained by Fightzone pundit, Glenn McCrory.

“I’ve seen a few YouTube clips of him [as a pro]. If he comes to fight he’s going to come unstuck because I’m a lot stronger than him, and if comes with a gameplan then I’ll outbox him.

“He’s a good fighter, he’s unbeaten, he’s confident but it’s going to be a bit too soon for him. He won’t come forward onto me, I know that for a fact. If he comes forward he’s going to get taken out, one hundred per cent.

“I’ve been in this pro game a long time. I’ve been in with top fighters in sparring and you can’t read too much into sparring, but I know what I can do. He’s never been in with a fighter like me, I tell you that. My amateur experience, all the training I’ve done with different trainers, I’ve learnt bits off them all.

“If I can’t beat him with my experience then I don’t know what to do! Every fight I go in like it’s my last, I put everything on the line. I’ve been boxing since I was seven; fighting all my life. I can do it all. I can box, I can fight, I can counterpunch on the back foot and front foot.

“Fightzone looks like a great platform for me to fight on and I’m looking forward to showing everyone what I can do – it’s about time!”