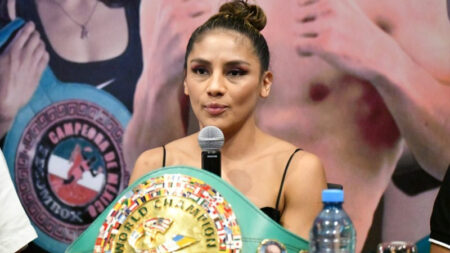 Little Lulu won the WBC title a year ago defeating tough former champion Guadalupe Martinez. Seven months later, Juárez made the first defence of her belt in a tough give and take battle against Diana Fernández and now she will face Luz Elena Aguilar on Friday night, November 12th at the International Convention Center in Puerto Vallarta, Jalisco.

“I am very happy to fight for the first time in Puerto Vallarta. I have never been here before,  but I am already looking forward to Friday the 12th, to get into the ring and give a great show; It will be my second defence of the world championship, and of course I`m focusing on victory,” earnestly pledged Lourdes Juárez.

Juárez Trejo reaches this commitment after an intense camp at the Otomí Ceremonial Center in the mountains perched over Toluca, where she had the opportunity to once again share the gym, by training alongside her sister, Mariana ‘Barby’ Juárez.