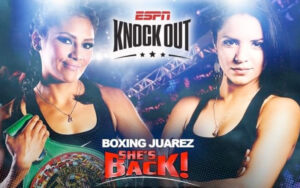 Juárez will defend the Green and Gold Belt against Fernández, whom she faced in 2017.

The clash between Juárez Trejo and Fernández Ortiz is part of a card that Promociones del Pueblo presents in association with BXSTRS Promotions and that will reach all of Latin America through “ESPN Knockout”.