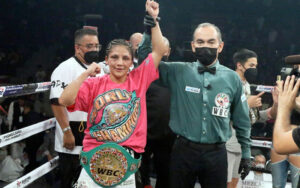 Diana boxed behind her jab during the first couple of rounds, using her longer reach to catch the oncoming and advancing Lulu with some crisp right counters, as Lulu started going to the body.

In round three, and as Diana continued to dance, Lulu with swaggering confidence, riskily placed her gloves on her hips and did a complimentary jig, smartly bringing her fists back to the proper guard, just in time to negate a Diana rush.

In round four the action really started to warm up . Diana had been parrying Lulu`s pawing left jab on her right arm. Then, Lulu launched a fierce two-fisted attack, driving Diana on to the back foot. In the next round, Lulu again drove her back, this time on to the ropes, going to work with gusto, ending the round with a right uppercut. By this stage, Lulu was sporting a swelling bruise under her right eye.

At the half way point, Diana opened up and Lulu briefly switched to southpaw, landing a right and then a left to the head, with Diana fighting back with comparable intensity.

Diana jabbed in round seven, landing two counter rights. Then Lula caught her flush with a big right hook, hurting her. Lulu then dropped her hands and stood directly in front of Diana for a moment of intimidating defiance.

Encouraged and spurred on by her corner, Diana was more aggressive in the eighth, provoking a toe-to-toe brawl, dominated by Lulu. More of the same in the following round, and Diana slipped, going down, taking some time to get up and regain her footing. The round ended with Lulu landing a big left hook to the head, looking strong and fresher.

In the final round, Diana landed a good right to the head and several to the body, and then again slipped and went down. Lula counter attacked with gusto. The bell ringing was almost inaudible, Lulu dropped her hands and received several more punches from Diana, who hadn`t heard it.

The scores were: 95-94 and 96-95 for Lulu, and 96-94 for Diana. Diana had put up a creditable fight in front of her hometown fans, but the onslaught Lulu unleashed in the fourth and the fifth round, which had put Diana under severe pressure, proved decisive. In the closing championship rounds, Diana was tiring and Lulu`s extra zip was noticeable.