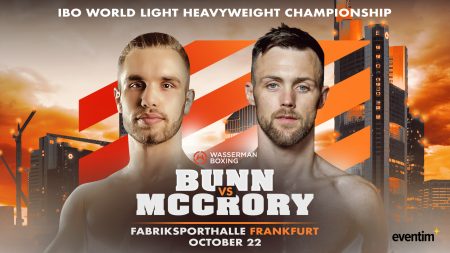 Two exciting Youth world title fights have been added to the undercard for the huge IBO World light heavyweight championship showdown between unbeaten local hero Leon Bunn and hard-hitting Irishman Padraig McCrory, brought to you by Wasserman Boxing in association with Probellum. The unbeaten Luca Cinqueoncie from Offenbach, Germany, will put his WBC and IBF Youth World light heavyweight titles on the line against Leon Maric, while Leon Bauer and Hancel Gonzalez are set to collide in battle of the undefeated for the vacant IBF and IBO Youth World super middleweight titles. Both Youth title fights are presented in collaboration with Rainer Gottwald’s KAIF 5STAR Boxing Promotion.

The unbeaten Luca Cinqueoncie will have home advantage in Frankfurt, as his birth town of Offenbach is only a few kilometers away from the site of the fight on October 22. It will be a rematch between Cinqueoncie and Maric, as they previously fought in May. The German “Rocky“ won the fight on points, but Maric activated a rematch clause to secure another shot at Cinqueoncie. While the fans can certainly expect an explosive rematch between the two light heavyweights, Cinqueoncie does not lack confidence ahead of the fight: “I want to thank Rainer Gottwald and Kalle Sauerland for this opportunity. It’s a huge honor to be fighting on such a big stage, that’s what you dream of as a kid“, he said. “Frankfurt is close to Offenbach and I can’t wait to put on a show for my fans. It’ll be a great fight, but I’ll bring that victory back home!“

In a battle of undefeated super middleweights, 24-years old Leon Bauer from Kandel, Germany, will square off with 21-years old Hancel Gonzalez from Columbia. The vacant IBF and IBO Youth World titles will be on the line. The fight was originally scheduled for September 24 in Ludwigshafen, but Bauer tested positive for Covid ahead of the bout. While he is still isolated at home, Bauer is already feeling better and is ready to resume training in the next couple of days – with the clear goal in mind to be at his very best on October 22 in Frankfurt!

Promoter Kalle Sauerland is excited by the addition of the two Youth world championships to the Frankfurt Fight Night: “It was a pleasure to work with Rainer Gottwald on securing those two exciting title fights! Luca Cinqueoncie and Leon Bauer are highly talented fighters, ready to make their way to the top. Offenbach is not far from Frankfurt, so Luca will have home advantage as well and I’m sure that many of his fans will make the drive to the arena. Everyone is in for a great event on October 22 at the Fabriksporthalle!“

Rainer Gottwald, promoter of both Cinqueoncie and Bauer, cannot wait for the first bell at the Fabriksporthalle either: “Luca and Leon are two tough, strong fighters and they will prove their talent on October 22. It was a great pleasure to work with Kalle and Wasserman Boxing to make this happen. It’s important for German boxing that we all work together and stage big events like this. All the fans from Frankfurt and Offenbach can look forward to an amazing atmosphere on fight night!“

Tickets for the IBO World light heavyweight championship between Leon Bunn and Padraig McCrory and the two Youth World championships featuring Luca Cinqueoncie and Leon Bauer on October 22 at the Fabriksporthalle in Frankfurt, Germany, are on sale now and can be bought via Eventim.