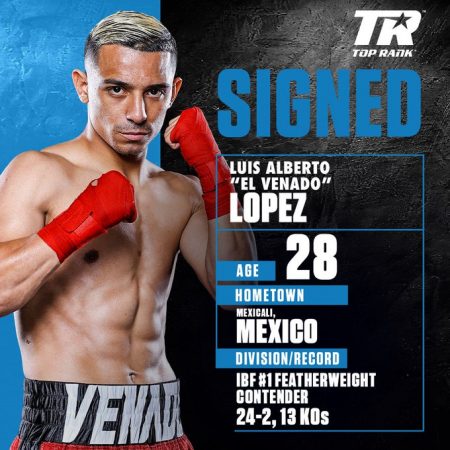 Luis Alberto “El Venado” Lopez, the fast-rising featherweight from Mexicali, Mexico, has signed a new multi-year promotional contract with Top Rank. The 28-year-old Lopez (24-2, 13 KOs), ranked the IBF No. 1 featherweight contender, broke out from the 126-pound pack in 2021.

He began his campaign on March 18 with a first-round knockout over countryman Mauro Loreto in Mexicali. His breakthrough performance came on Sept. 10 in Tucson, Arizona, when he battered then-unbeaten prospect Gabriel Flores Jr. over 10 rounds en route to a unanimous decision. Less than three months later, he punched his passport once again and knocked out the previously unbeaten Isaac Lowe at the historic York Hall in London.

The Lowe triumph — an IBF world title eliminator — made Lopez the mandatory challenger for Kiko Martinez, the decorated Spaniard who recently knocked out Kid Galahad to become a two-weight world champion. Lopez hopes to challenge Martinez in the first half of 2022.

“There are few more entertaining warriors in boxing than Luis Alberto Lopez, and he earned a new promotional contract and a shot at the title with a sensational year,” said Top Rank chairman Bob Arum.

Lopez said, “I am thankful to Bob Arum, Brad Goodman, and everybody at Top Rank. 2022 is the year I achieve my dream of becoming a world champion. Kiko Martinez is a great champion, but he is the man standing in my way. Next year, I will bring that IBF title home to Mexicali.”