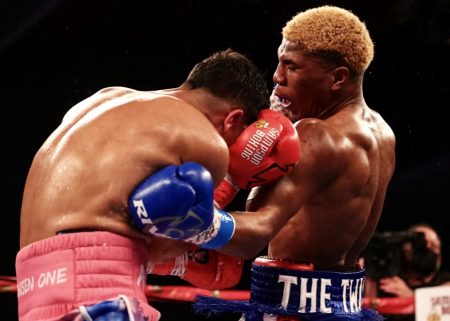 Luis “The Twist” Nuñez looked impressive in his second consecutive ShoBox: The New Generation outing registering a 10th round technical knockout against a game Carlos Arrieta in the super featherweight main event of an action-packed tripleheader featuring six undefeated fighters on SHOWTIME® Friday night at the Caribe Royale Resort.

The Dominican Republic’s Nuñez (16-0, 12 KOs) worked the body effectively all night against Puerto Rico’s Arrieta (14-1, 8 KOs), finally landing a staggering straight right hand that stunned Arrieta in the middle of the final round. Nuñez, 22, then finished off Arrieta with a flurry of punches that ultimately led to the stoppage at 1:41 of the 10th round on a night that saw three undefeated records fall on the popular ShoBox prospect series.

“The plan was to work the body and to break him down and that’s what we did,” Nunez said. “I saw the right hand was landing and I kept throwing it and trying to set him up for it and attacking until we got what we wanted in the final round. It was a great shot and great win for my career. It’s the way I wanted to close the fight.”

Nuñez landed 38 percent of his power punches and out-landed Arrieta 142-131 in total punches on the night.

Arrieta’s loss was the 206th time in ShoBox’s 21-year history that a fighter lost his undefeated record and the Nuñez-Arrieta matchup was the 144th ShoBox fight between undefeated fighters.

“I thought it was a quick stoppage,” Arrieta said. “I was a little stunned, but I could have continued. I didn’t want the fight to be stopped. He was a strong fighter, a true warrior. He’s a very good fighter and was very effective with the right hand.”

Nuñez said he is ready to go back down to 126 pounds after contesting his first professional fight in the 130-pound super featherweight division. “I fought for most of my career at 122 so 126 is where I belong,” he said. “I felt strong at this weight [super featherweight] but 126 is the weight for me.”

He added: “I knew he was a tough fighter and I’m not surprised the fight went as it did. He came to fight, and we gave the fans a good fight.”

In the co-feature, Otar Eranosyan remained unbeaten with his second consecutive ShoBox victory as he dominated Starling Castillo with a unanimous-decision victory in an eight-round lightweight affair. The scores were 79-71 and 80-70 twice.

The former highly decorated Georgian amateur Eranosyan (11-0, 6 KOs), fighting out of Hollywood, Fla., dominated the bout, scoring a 10-7 first round with two knockdowns against the Dominican Republic’s Castillo (16-1, 12 KOs).

“We work on the left hook in training and when the opening presented itself I landed the left hook on the (first) knockdown,” said Eranosyan, ranked No. 7 by the WBA at 130 pounds, who fought six times in 2021. “It’s fine that he got up. This is pro boxing. We train for 12 rounds, 10 rounds, eight rounds, however long it takes we will be there.

“I feel great about my performance. This is why I train like I do and fight as hard as I do for nights like these.”

With the win, Eranosyan believes the time is now for him to face the blue-chippers around his weight class.

“I’m ready for all the champions. Bring them on,” Eranosyan said. “Shakur Stevenson, Oscar Valdez, I’m ready for all of them. I’m getting better and better each fight and I’m ready now to face the best. I know that with more performances like these, soon I will be champion of the world.”

The 26-year-old Castillo suffered a knockdown in the first round on a left hand by Eranosyan that startled Castillo but wasn’t a direct connect. Just seconds before the round ended, Castillo was sent to the canvas once again on a counter right hand giving Eranosyan a 10-7 round and commanding early-fight lead.

Eranosyan outlanded Castillo 153-102 in total punches. Of his 153 landed punches, 150 were power punches for Eranosyan.

Foster (14-0, 9 KOs) of West Haven, Conn., overcame a slow start but was the busier fighter, outthrowing De Los Santos 468-421. Fighting in his U.S. debut, the power-punching De Los Santos (13-1, 12 KOs) of Santo Domingo, Dominican Republic, had an eventful fourth round, suffering a cut above his left eye, which seemed to slow him over the final four rounds. It was the first time the Dominican suffered a cut in his professional career. De Los Santos also had a point taken away in the fourth for holding. Fatigue was also a factor as De Los Santos had never been past the sixth round in his young career and seemed to run out of gas as the fight wore on.

“I was pressuring him the whole time and I knew he was slowing down and eventually I would get to him,” said Foster, who kept moving forward as the fight progressed and dictated and landed the more powerful punches. “I thought it was the right decision because I was landing more shots as the fight went on.”

The 28-year-old Foster – the younger brother of 20-0 professional light heavyweight prospect Charles Foster – was surprised with how fast De Los Santos started. “I knew I had to stay calm, and I adapted and my experience allowed me to adjust to what was happening,” Foster said. “He wasn’t devastating, and the punches never hurt me. I knew he would slow down and when he did, I began to land my shots and had success with my pressure.”

“I thought it was a close fight, but I thought I did enough to earn the victory. I was landing the harder shots throughout and he never hurt me.”

The event was promoted by Sampson Boxing. The ShoBox tripleheader will re-air on Monday at 11 p.m. ET/PT on SHOWTIME EXTREME®.