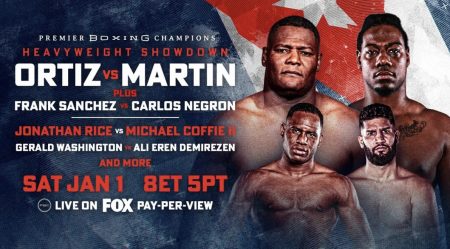 Ortiz and Martin will meet in a 12-round IBF Heavyweight Title Eliminator in the main the event, while Sanchez and Negron clash in the 10-round co-main event as part of the action beginning at 8 p.m. ET/5 p.m. PT.

The pay-per-view action will also see heavyweight contenders Jonnie Rice and Michael Coffie battle in a 10-round rematch, former title challenger Gerald “El Gallo Negro” Washington in a 10-round showdown against Turkish Olympian Ali Eren Demirezen, and unbeaten Viktor Faust facing Iago Kiladze in a 10-round attraction to open the pay-per-view.

Here is what the press conference participants had to say Tuesday:

“I’m just thankful and happy to be in this position. It’s great to be at this stage. I’m ready to do my job and shine on New Year’s Day.

“It’s fascinating to be fighting so close to my adopted hometown in South Florida. I’m always motivated to fight, no matter what. My training camp is so intense that I still don’t have much time to see my family, but I’m looking forward to this fight in my backyard.

“My mind and my body are in tip-top shape. If anyone thinks that I won’t be up to the challenge, they’re dead wrong. I welcome any challenger, and that includes Charles Martin.

“My strategy and goal have not changed. I want to face the best and be the best. Whatever path that takes me on, I’m okay with it. The goal will remain the same.

“Everybody that knows me knows that I don’t mess around in the gym. Throwing punches is what I do best. I take it very seriously. If someone bests me one day, I say a good job, learn the lesson, and get better the next day.

“I’ve been able to help Carlos Negron in training, mainly because I know he’s fighting a Cuban opponent. That will help him, and I wish him the best on January 1.

“Nobody is ever going to be able to take away my dream of becoming world champion. I will continue to prepare for my next challenge against Charles Martin. Then I’m going to keep going up from there. I have no reason to believe that my dream won’t come true.

“I’m ready for war. I’m going to come out there and give it all that I’ve got. I’m not worried about any size advantages my opponent might have. My mentality is to be ready and take on all challenges.

“Training camp has been excellent. I’m just working hard. I’m used to this by now. All I know is hard work. I’m putting in the effort each day. That’s what we do.

“This is the most focused I’ve been in my career. This fight is everything for me. A lot of people didn’t want to fight me. I give Ortiz credit for stepping up and taking the fight.

“People are going to be shocked with what I do in this fight. I’ve always had what it takes, and now I’m adding the main ingredient to it, which is dedication. I know that’s what it takes to become a world champion again.

“It’s like night and day for me since I lost the title. I used to eat fast food, and now my diet is entirely different. I always worked hard, but now I’ve put everything together. I feel unstoppable.

“Manny Robles has helped me become a well-rounded fighter. I can do many more things, and I have more tools in my arsenal. I’m a much more disciplined fighter inside and outside the ring.

“At this point, I’m just focused on Luis Ortiz. I can’t look beyond this fight. I’m focused on getting Luis Ortiz out of there. I wake up in the morning, and I see Luis Ortiz. I’m going to handle this business on January 1, and then I’ll be able to talk about the future.

“We’re so happy to be fighting in South Florida on January 1. We have great preparations with team Canelo right now. It could not be going any better. I want to show the Cuban fans in Florida that I will be ready for the world title next year.

“My fight in October was easier than I had expected. I left unscathed. So when I was asked about fighting on January 1, I did not hesitate. I fought well in my last fight, and I wanted to carry that momentum over to 2022.

“This is a significant fight for me. I want to keep climbing in the rankings, but I also want to stay active and continue to prove my worth. This is an excellent stage for me to do that.

“Carlos has been on my radar, and I had a feeling I would be fighting him at some point. I’ve studied him closely in the past. I feel like I’m the better boxer and that he will be another stop on my way to fighting for the title next year.

“The most important thing I learned from the Efe Ajagba fight was to not listen to the outside noise. All I heard about was how he was a guy who knocked everyone out. During the battle, I realized that I was able to steamroll him. But I realized that it’s not just about how hard you punch in boxing, but it’s about your technique.

“I’m ready to face the best. Everything I have learned from Eddy Reynoso has made me stronger and brought me to this point. I’m ready for anyone standing in my way. I’ll take on any challenge at any time.”

“I’m very thankful for this opportunity. I feel great right now. We’re having very positive training and top-notch preparation as we prepare for January 1.

“I’m thrilled that we’re able to make this fight happen. The winners are going to be the fans. We both want to show what we’re capable of.

“I’m proud to be fighting a great fighter like Frank Sanchez. He put on a show in his last fight. I’m excited about the challenge. I’m very confident, and I have no nerves heading into January 1.

“I have to thank my team for keeping me active as they have recently. It’s been essential for me too. I want to be in the ring as long as I’m healthy. I’m hoping that activity will carry over into this fight.

“I felt like me, and Frank’s paths were going to converge at some point. We didn’t know when, but we knew it would happen. I respect him as a boxer, and I’m looking forward to this fight.

“The main event is a very intriguing fight, and it’s all part of an excellent lineup. The goal of every fighter is to become a world champion. Luis Ortiz, at six-foot-four, has twice vied for that title and knows he needs to beat Charles Martin for another chance at the crown. Charles Martin, at six-foot-five, is the highest-ranked IBF contender, and he’s been champion before. He wants to get back there again with a statement on January 1.

“In the co-main event, ‘The Cuban Flash’ Frank Sanchez, undefeated and standing at six-foot-four, comes in off of a big win on the Fury vs. Wilder III undercard, and he’s taking on the six-foot-six Puerto Rican heavyweight Carlos Negron, who is on a five-fight winning streak.

“It’s nothing but heavyweights on New Year’s Day. They’re the kings of the ring, and you won’t want to miss it.”