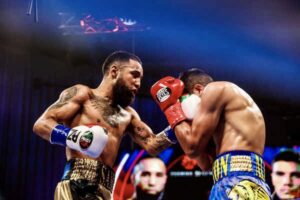 “Alameda has a nice jab, he definitely connected, but I always felt like I had the fight under control. His defense was good, but at the end I really tightened up my attack and was able to get the victory.

“We know he had a lot of experience as an amateur, so we prepared for a quality opponent. It’s not an excuse, but I haven’t fought in a year, so I think that affected my performance a little.

“I got the victory because I landed more. You always look for the knockout, but he used the jab a lot and that threw me off a little bit until I was able to connect more at the end of the fight.

“There are a lot of good fighters in this division. Brandon Figueroa’s name has come up, but we’ll check with the team and go from there. We’re ready to fight anyone at 122-pounds. We don’t fear anybody.”