Lulu vs. Bonita this Friday in Chihuahua, Mexico 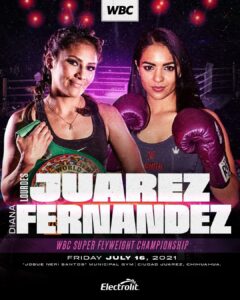 Both fighters complied with the 7-day weigh-in, a rule required by the WBC to prevent dehydration problems.

With a professional record of 23 wins and three defeats, “Bella” Fernández is convinced that she will be able to snatch the world title from the champion: “I have no doubts that this opportunity comes at the best moment of my career and that I am going to take advantage of it. After taking the championship from Lulú, I am going to retire Barby Juárez” Fernández commented.

It`s presented by Promociones del Pueblo in association with BXSTRS Promotions and will be broadcast throughout Latin America through ‘Friday Fight Night ESPN Knockout.

The sale of tickets for this sensational event is already done through the Don Boletón system at:  https://ventas.donboleton.com/eventperformances.asp?evt=2123