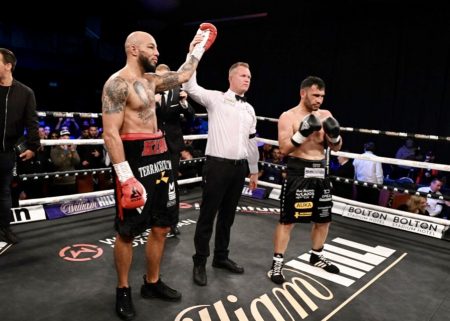 ‘King’ Lyndon Arthur returned to winning ways as he showed the Channel 5 audience what they had been missing. After controlling proceedings from the first bell Arthur showed his extra spite as he meticulously broke down a tough Walter Sequeira, to eventually finish his Argentine opponent off in the sixth round.

Under the bright lights in Bolton, it was a professional job done by Arthur as he showcased his superior skill and strength. The jab, the power, and the variety of his work put Sequeira in waters he simply could not swim in. On his debut Wasserman Boxing fight night, it was the perfect performance to start of his journey with the promotion that will see him continue to make his way to the top of the light heavyweight division.

The eyes turned to the North East during the night, as ‘Trojan’ Troy Williamson bullied David Benitez to a sixth round stoppage to avoid the banana skin and set up a huge northern clash with ‘PBK’ Josh Kelly. The British Super-Welterweight title will be on the line in December against Kelly, in what promises to be one of the biggest fights to come to the North East.

Gavin Gwynne retained his British Lightweight title with an unbelievably entertaining draw against Craig Woodruff. The momentum of the bout often changed from one fighter to the other, and it ultimately became too close for the judges to try and call a winner. Both men shone as the two welsh fighters represented their country and sport in a fight that split the crowd regarding who had won, but unanimously captivated all.

Lyndon Arthur def. Walter Gabriel Sequeira via stoppage in the sixth round

Troy Williamson def. David Benitez via stoppage in the sixth round

James Moorcroft def. Olaide Fijabi via stoppage in the second round