Lyndon out to settle business with Yarde, has warning for Tunde 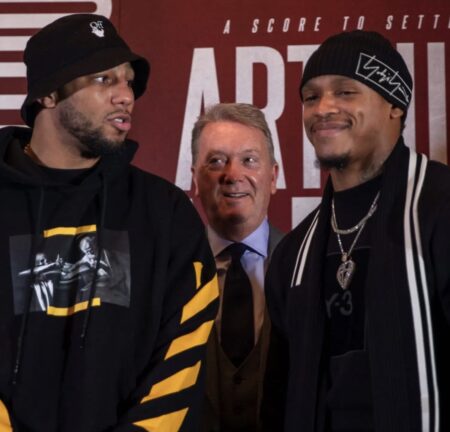 LYNDON ARTHUR has warned Tunde Ajayi to zip his lip if he ever comes face to face with Pat Barrett when the cameras aren’t rolling.

The fighting will be done for real when Mancunian Arthur risks his Commonwealth and WBO Inter-Continental titles against Yarde at London’s Copper Box Arena on Saturday December 4, live on BT Sport.

It’s a rematch of Arthur’s split decision win against the Ilford knockout artist last December and besides titles being on the line the winner can look forward to a 2022 crack at WBO World champion, Joe Smith.

The respect between the fighters is real, but there is little love between Ajayi and Barrett who stormed out of the now infamous press conference that went viral.

Arthur, 30, said: “I haven’t taken Tunde’s ‘road’ talk too seriously. The beef between Tunde and Pat is down to them.

“I still don’t know if Pat was being serious or not, but for me Tunde was entertaining for the public. It was fun for people to watch.

“One thing, I wouldn’t advise Tunde is to get on the wrong side of Pat somewhere that isn’t public.”

Lyndon had hoped for a straight shot at Smith and then defend against Yarde, but a rematch clause means a great domestic clash to round off Queensberry’s cards for 2021 when the stablemates meet again.

He added: “It’s a case of getting this fight out of the way and then the World title next year.

“When I say that I don’t mean it’s a fight I am overlooking. It’s huge because it’s the win that brings World titles.

“Yarde and myself are fighters and just want to settle our business next month.

“I guess Yarde and myself are the same sort of people and whenever I have met him there isn’t any animosity. He is in my division and we have to fight.

“Perhaps when I win again he can come up to Manchester and have a night out or something like that.”

Since the controversial clash almost 12 months ago, Arthur has seen nine rounds of action when he stopped David Faraci in July.

In Yarde’s only fight he needed less than three minutes to beat Alex Theran in the following month.

Arthur says he has no activity advantage and insists: “A good fighter gets the rounds in the gym. I don’t believe in ring rust. As long as you get sparring and train hard it should come off.”

Manchester’s Lyndon Arthur (19-0, 13 KOs) defends his Commonwealth and WBO International Light-Heavyweight title against Ilford’s Anthony Yarde (21-2, 20 KOs) in a rematch of last December’s controversial clash that he won on points.

Tickets for the event can be purchased here