Mahmoud Charr Named “Champion in Recess” With The WBA 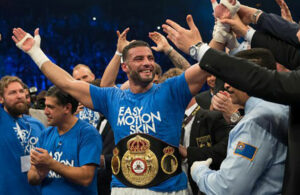 The World Boxing Association (WBA) declared heavyweight Mahmoud Charr as champion in recess after 38 months without defending the world title.

Interim champion Trevor Bryan and challenger Berman Stiverne will fight for the championship this Friday, January 29, in Florida, and the winner will have to fight Charr in a period not exceeding 120 days, according to a resolution issued by the Championships Committee of the pioneer organization.

The decision was made strictly based on WBA regulations. As Rule C.14 dictates, all boxers, promoters and representatives are obliged to know and familiarize themselves with the WBA regulations. On the other hand, Rule C.22-24 states that when a champion is unable to defend the title belt at the time specified, whether for medical, legal or any other reason beyond his control, the Committee may appoint him as champion in recess and call the official contenders to fight.

Based on the above, the WBA presumes that Charr knows the internal rules and knows that he must defend within the time limits. At this moment he has more than three years without stepping into the ring.

The organization understands that Charr is willing to fight but a cause beyond his control prevented him from making the defense scheduled for this week. On the other hand, obtaining U.S. visas, one of the obstacles he had, is a situation beyond the control of the World Boxing Association. Now, as champion in recess, Charr will be able to solve his legal and business situation and be ready to fight in the coming months.

Now Bryan, WBA interim champion, and his representative company Don King Promotions, made the request to face Stiverne, an opponent who meets the requirements to fight for the championship.

The winner must fight Charr by May 30, 2021. In the event of a draw, Bryan will face Charr before the aforementioned date.