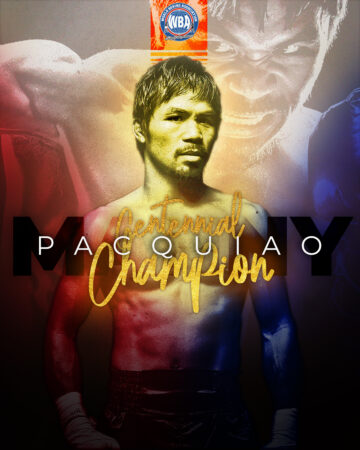 The World Boxing Association (WBA) awarded the Centennial Champion recognition to Filipino Manny Pacquiao due to his great career both in and out of the ring, and in the midst of the celebration of the 100th anniversary of the pioneer body.

“The Centennial Champion is a way to honor the legends of our sport and also to celebrate our 100 years of existence. Without a doubt, Manny meets all the requirements to obtain this recognition that he will never lose, because he earned it by leaving a great legacy in and out of the ring. We are proud to give this distinction to a man who gave so much to boxing”

The centennial title is commemorative and was awarded to Pacquiao for his status as a living legend and for his importance in the history of the sport. This recognition is non-transferable and “Pacman” has earned it because of his career, so it cannot be put at stake during any fight.

Pacquiao has been one of the most important champions of the WBA thanks to his great feats. He earned titles in eight different categories, faced and beat all the greats of an era, and has had a long career in which he has been competitive over the years.

His career is not just limited to what he has achieved in the ring, but it has transcended to culture and has served as an example both in his country and in the world.

The WBA congratulates Manny for his great career and is proud to grant this recognition to a man who has managed to represent the black and gold colors with his impeccable career. A big shout out to our Centennial Champion, Mr. Manny Pacquiao.