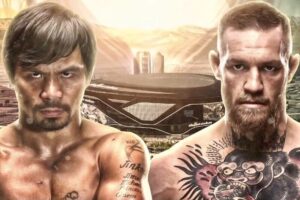 All the time, fighters dream of fights, hope for fights, say they want fights….but that does not mean that they will happen. Some are fighters just dreaming or are just plain wishful thinking.

So when it was put out to the public that Conor McGregor wanted to fight Manny Pacquiao, most thought this idea fell into one of the aforementioned. I thought so as well.

With that in mind, my eyebrows raised when Pacquiao announced he wants it as well. Money talks and there will be plenty of money surrounding this fight/event.

Pacquiao said in a statement: “At the present time, I do not have an existing management contract with Paradigm Sports Management.

“I have formed my own company, Pac Sports and Entertainment, and am more than willing to give the fans what they want: An exciting fight with Conor McGregor under terms and conditions where I am the co-promoter with my company.

“Thank you and God bless.”

McGregor, with a professional boxing record of 0-1 and against another all time great (the first being Floyd Mayweather) will cause worldwide interest and ultimately, money. This is what it will be about.

Yes, another guilty pleasure of sorts I would pay to see even if it is little more than a circus event with a little bit of intrigue thrown in (it will be a PPV event). At what point though can McGregor carry on with these high profile boxing matches, especially if he becomes 0-2 (if Pacquiao wins)? I am sure Paulie Malignaggi would be called out.

But what if, and this is a big if, McGregor gets lucky against Pacquiao who turns 42 in December. Even legends can’t go on forever.