Manny Pacquiao vs. Magnus Carlsen: Seconds out, round 1 TOMORROW 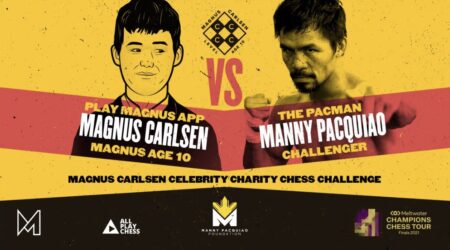 The gloves are off! Boxing megastar Manny “Pac-Man” Pacquiao faces his strongest challenge yet tomorrow: a 10-year-old version of chess king Magnus Carlsen.

The newly-retired 12-time boxing world champ will make a rare appearance to compete in the Magnus Carlsen Celebrity Charity Challenge.

He tweeted today: “I’ve fought some tough opponents in the ring, but I’ve never faced anyone like @MagnusCarlsen in a game of chess. He’s a true champ. Wish me the best for October 1, when I appear on the @ChampChessTour show!”

Pacquiao, who is embarking on a run for President of the Philippines, is the latest and greatest in a line of big names to take on the World Chess Champion’s younger self.

The unique spectacle will be showcased during the Finals event of the $1.6 million Meltwater Champions Chess Tour, the most prestigious event in the online chess calendar.

Pacquiao, a huge chess fan and a Senator in his homeland, will no doubt be hoping he can box clever and land a knockout blow.

But so far, no celebrity taking the challenge has beaten Carlsen, the highest-rated chess player in history, on his Play Magnus app. The longest anyone has survived is 49 moves.

The stakes are high. Pacquiao – who is hoping to raise awareness for the “Stop Asian Hate” campaign – will get $5,000 to donate to his chosen charity just for taking part. If he wins the challenge by lasting the longest, he will secure an extra $50,000.

Carlsen said: “I can’t wait to see how the legendary Manny Pacquiao does against a 10-year-old me on the Play Magnus app. I wasn’t World Champion back then, but I was already playing decently so it’s going to be hard!”

Pacquiao added: “I am very much excited to play Magnus Carlsen, the world chess champion. This is something that doesn’t happen every day and I will be placed in a different arena this time around.”

Pacquiao will be raising funds for the Manny Pacquiao Foundation, the charity built on the Senator’s commitment to giving back and fighting for those less fortunate.

Watch the Meltwater Champions Chess Tour broadcast at 18:45 CEST on October 1 to find out what happens when the 12-time world boxing champ takes on the four-time World Chess Champion.