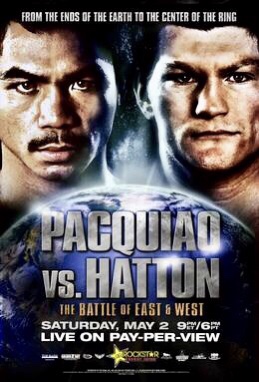 Pacquiao vs. Ricky Hatton, billed as The Battle of East and West, was a professional boxing match for The Ring magazine’s light welterweight championship and IBO super lightweight championship between Manny Pacquiao of General Santos, Philippines and Ricky Hatton of Manchester, United Kingdom. The bout was held on 2 May 2009 at the MGM Grand in Las Vegas, Nevada, United States and drew 1.75 million pay-per-view buys.

Pacquiao defeated Hatton by knockout in the second round. It was named Knockout of the Year by The Ring magazine. Pacquiao’s victory made him, at the time, one of only two boxers (the other being Oscar De La Hoya) to win a world title in six different weight divisions; Pacquiao would later win a world title in an unprecedented seventh weight division on 14 November 2009 against Miguel Cotto and another in an eighth weight division on 13 November 2010 against Antonio Margarito.