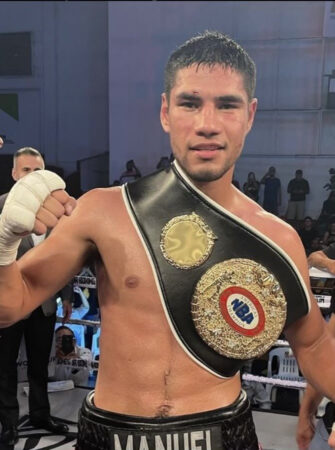 Arguably the best Mexican super middleweight outside of Saul Canelo” Alvarez, Gallegos needs to defeat Lopez to maintain his status in Mexican boxing, as well as position himself for a showdown against undefeated Guatemalan Lester Martinez (9-0, 9 KOs), who makes his first WBO Latino Super Middleweight title defense against in the 10-round co-featured event versus Cuban challenger, Raiko Santana (8-2, 5 KOs).

“After ‘Canelo,’ right now, I’m the best super middleweight of Mexico, without a doubt,” Gallegos said. “If he (Martinez) and I both win, it’ll be a big fight for me. I’m only concentrating on Lopez fight now. I don’t think about Lester or whatever, just Lopez, for now, because it is going to be a really hard fight for me.

“I feel he will start fast, wanting me to feel his power, but I am ready to go to war right now. It will be a brawl and I don’t believe this fight goes the distance.”

Gallegos is a student of Mexican boxing, idolized greats such as Julio Cesar Chavez, St. Juan Manuel Marquez, and Erik Morales. “El Meno” is coming off an impressive 10-round unanimous decision win over Kevin Newman II (11-2-1) this past June, also on an RJJ Boxing card that streamed live on UFC FIGHT PASS. The only loss on Gallegos’ pro record is to Oziel Santoya Bravo (10-1-1) a year ago.

“I am too young to have watched Chavez Sr.,” Gallegos concluded. “I never saw him fight, but my dad told me he was the best. I saw his fights on YouTube. I saw Marquez fight and admired his warrior heart, discipline, and technique. Morales always brought great fights for fans.”