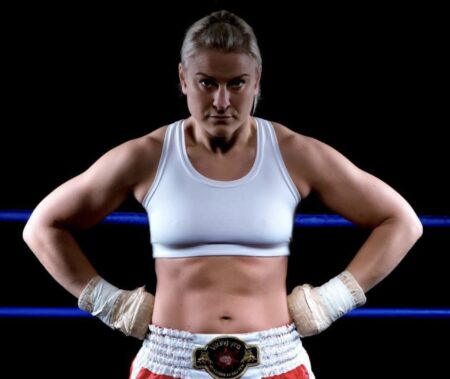 Maria Lindberg is warning British boxing fans to underestimate her at their peril ahead of her huge double world title fight against Hannah Rankin on November 5.  Lindberg, from Sweden, and Scotland’s Rankin clash for the IBO and WBA Super Welterweight Titles at Tottenham Hotspur FC’s Banqueting Hall live on Fightzone – in one of the biggest nights for women’s boxing in the UK this year.

Lindberg was last seen in a British ring in April when she was beaten inside three rounds by Savannah Marshall for the Hartlepool fighter’s WBO World Middleweight Title.  That outing though shouldn’t be held up as a true reflection of the Scandinavian’s ability, with the fight having been accepted on just five days notice, up at the weight category above and in against one of the world’s best female fighters.

Lindberg has true pedigree.  The 44-year-old had her first pro fight way back in 2003 and has amassed a wealth of valuable experience since picking up that first victory.  The Malmo resident has fought in nine different countries since turning pro, has been the distance twice with female boxing legend Christina Hammer, and has previously won and defended the International Boxing Federation (IBF) World Super Welterweight crown.

Although age is on 31-year-old Rankin’s side, Lindberg, 44, comes to the UK with just seven defeats in 29 outings, and 10 big KOs under her belt.   Plenty of boxing insiders see the contest as a genuinely even affair – predicting a classic clash between youth and experience.  Ahead of the big night, Lindberg says she is coming to the UK to give Rankin the fight of her life.

“What should people take from my fight with Savannah [Marshall]?  Nothing!  I took that fight with five days notice. I didn´t prepare at all, just went to London and took a chance. Something I have never done before and I wanted to give it a shot. But hey, feel free to underestimate me!

“I expect this fight to be tough; we definitely both want to win.  I prepare for every fight as if it will be the hardest fight in my career and this time is no exception. It doesn´t matter how hard it will be, I am ready for it.

“I’m looking forward to everything about this fight. I’ve always liked the exposure that professional boxing gives you and headlining on Fightzone is definitely something I’m really looking forward to. I can’t wait for the show to start.”