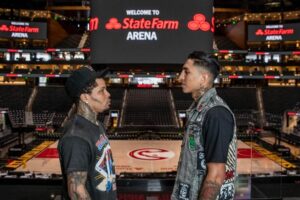 Mario Barrios is in an unusual position in the boxing world. Despite being the World Boxing Association (WBA) Super Lightweight Champion, analysts do not see him as the favorite against Gervonta Davis for their fight on June 26th in Atlanta, Georgia.

On Thursday, during a press conference, the champion met face to face with Davis, one of the most talented and mediatic fighters today and whom he will have to beat if he wants to keep his crown and his undefeated record.

“This is a huge opportunity for me. ‘Tank’ called me out. I know he’s trying to do something great, but this is a dangerous fight for him. It’s going to be an action-packed fight. We’ve never faced fighters like each other before. We’re going to see on June 26th if it’s the right move for him”, said the “Aztec”.

“’Tank’ is jumping up two weight classes. He’s doing something a lot of great fighters have done. He even said it: this isn’t an easy fight for him. We’re ready to face the best version of ‘Tank’ that anyone has ever seen and it’s going to be war”, he added.

Barrios said that Gervonta is an explosive fighter but that he is the one that has to prove that he has the ability to withstand the punches at 140 pounds and keep his power as well. The bout will take place at the Atlanta Hawks arena and will be one of the big Premier Boxing Champions events for the month of June.

The champion is undefeated in 26 fights, with 17 KOs. Gervonta, on the other hand, has 24 victories, 23 before the limit.