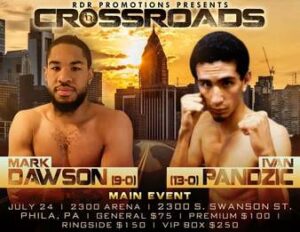 2300 Arena in South Philadelphia, USA 24/7/21
It was a battle of undefeated welterweights that highlighted RDR Promotions 2nd night of back-to-back shows as Mark Dawson won an eight round unanimous decision over towering Ivan Pandzic at the 2300 Arena in South Philadelphia.
The opening rounds saw Pandzic trying to use his 6’4″ frame with shots from the outside. His shots were largely ineffective, and Dawson was able to get to the distance where he was able to land solid counter shots. Pandzic was drawn into a firefight on several occasions, which was much to the delight of Dawson as he got the better of the exchanges which led to Pandzic being sent home with his first loss by scores of 79-73, 78-74 and 77-74.
Dawson, 148 lbs of Philadelphia is 9-0-1. Pandzic, 146.2 lbs of Rancho Cucamonga, CA is 13-1-1.
Sean Hemphill remained undefeated as he systematically beat down Robert Burwell in a super middleweight bout.
The time of the stoppage was 2:39 for Hemphill, 171 lbs of New Orleans, LA who is now 13-0 with eight knockouts. Burwell, 173 lbs of Orlando, FL is now 9-5.
Jabril Noble made a successful pro debut with a second round stoppage of Deijerro Revello in a super featherweight bout.
Noble dropped Revello in round two with a left hook. He finished it up seconds later with another left hook that dropped Revello and the fight was halted at 1:12.
Noble, 132.2 lbs of Philadelphia is 1-0 with one knockout. Revello, 131.2 lbs of Brighton, CO is 0-2.
Rasheen Brown remained undefeated with a six-round unanimous decision over Prisco Marquez in a featherweight fight.
Brown dropped Marquez with a straight left at the end of round one.
In round five, it was a left to the body that put Marquez on the deck.
Brown, 129 lbs of Philadelphia won by scores of 60-52, 59-53 and 58-55 and is now 10-0. Marquez, 127.9 lbs of Austin, TX is 4-4-1.
Edgar Joe Cortes won a six-round unanimous decision over Roberto Pucheta in a super bantamweight bout.
Cortes, 122.8 lbs of Millville, NJ won by scores of 58-56 on all cards and is now 9-6-1. Pucheta, 121.9 lbs of Jalisco, MEX is 10-19-2.
Joe Jones took out veteran Dhafir Smith in round three of a scheduled six-round cruiserweight bout.
In round two, Jones dropped Smith with a hard right hand. In round three, Jones landed 10 consecutive blows that forced referee Shawn Clark to stop the bout 18 seconds into the round.
Jones, 194.6 lbs of Jersey City, NJ is 12-4 with nine knockouts. Smith, 198.6 lbs of Upper Darby, PA is 28-26-7,
David Stevens remained undefeated with a four-round unanimous decision over Montrel James in a light heavyweight fight.
Stevens, 174.8 lbs of Reading, PA won by scores of 40-36 on all cards, and is now 6-0. James, 173.8 lbs of Saint Louis, MO is 1-6.