Mark Magsayo vs. Rey Vargas live on SHOWTIME on July 9 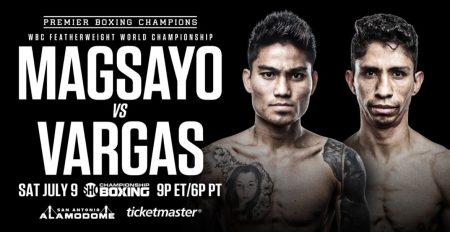 WBC Featherweight World Champion Mark “Magnifico” Magsayo will take on former world champion Rey Vargas in a battle of unbeatens that headlines action live on SHOWTIME Saturday, July 9 from the Alamodome in San Antonio, Texas in an event presented by Premier Boxing Champions.

“Saturday, July 9 will be topped by a showdown between champions as the Philippines’ Mark Magsayo makes his first title defense against the unbeaten Mexican, Rey Vargas, who will be looking to become a two-division champion at Alamodome on July 9 in San Antonio,” said Tom Brown, President of TGB Promotions. “This card will also see the return of one of the sport’s most exciting young stars, as all-action Brandon Figueroa steps back into the ring looking to make his mark in the featherweight division, beginning with a world title eliminator against the always tough Carlos Castro. Kicking off the action will be the highly-skilled rising lightweight contender, Frank Martin, in a tough test against the hard-hitting Ricardo Núñez.”

Additional coverage will include a pair of bouts streamed live on the SHOWTIME SPORTS YouTube channel beginning at 7 p.m. ET/4 p.m. PT. The action will see unbeaten welterweight contender Rashidi Ellis facing Argentine Olympian Alberto Palmetta in a 10-round duel, plus San Antonio’s own Ramon Cardenas battling Venezuela’s Michell Banquez in a 10-round bantamweight attraction.

Tickets for the live event, which is promoted by TGB Promotions, are on sale now and are available through Ticketmaster.com. The Martin vs. Núñez bout is promoted in association with Man Down Promotions.

The Filipino sensation Magsayo (24-0, 16 KOs) fights out of Pasig City, Metro Manila by way of Los Angeles, Calif., and became the latest champion from the boxing-rich nation in January when he outpointed longtime champion Gary Russell Jr. to capture the 126-pound title on SHOWTIME. The 26-year-old earned the opportunity by knocking out former champion Julio Ceja in the 10th round of a fight he trailed on the scorecards in August 2021. Magsayo is trained by Freddie Roach in Southern California and owns 12-round decision victories over Shoto Hayashi and Ramiro Robles, in addition to a sixth-round stoppage of former title challenger Chris Avalos.

“I am very thankful to my team for giving me the opportunity to defend my title in San Antonio,” said Magsayo. “I’m excited to be fighting in the same venue where my idol Manny Pacquiao fought Marco Antonio Barrera. That was the first fight I ever saw and the reason I started boxing. We are preparing for a strong Mexican fighter in Rey Vargas. Everyone knows what the Philippines vs. Mexico boxing rivalry brings to the ring and I’m excited to display my talents for the boxing fans in Texas and watching around the world.”

The former WBC 122-pound world champion, Vargas (35-0, 22 KOs), returned from a layoff due to injury to score a near shutout decision victory over Leonardo Baez in his featherweight debut in November 2021 on the undercard of Canelo vs. Plant. The 31-year-old went on the road to the U.K. to capture his title in 2017, winning a decision over previously unbeaten Gavin McDonnell. A native of Mexico City, Vargas made five successful defenses of his title, defeating top contenders Oscar Negrete, Ronny Rios and Azat Hovhannisyan. His fifth successful title defense came via unanimous decision over former world champion Tomoki Kameda in July 2019.

“This fight on July 9 will be a great battle against the Filipino warrior Mark Magsayo,” said Vargas, who trains under the tutelage of Hall of Fame trainer Ignacio “Nacho” Beristáin. “This is going to be exciting combat from start to finish. We know that he has great power, but we’ll be ready to counter that, and anything else he brings to the ring. This is going to be a magnificent fight and I can’t wait to step in there and compete.”

The 25-year-old Figueroa (22-1-1, 17 KOs) will debut at 126 pounds after dropping a 2021 Fight of the Year contender against Stephen Fulton Jr. in November on SHOWTIME, in which the two champions traded blows for 12 grueling rounds, eventually leading to what some observers thought was a controversial majority decision loss. Figueroa used his youth and relentless pressure to become the first person to defeat Luis Nery in their championship clash on SHOWTIME prior to the Fulton fight. A native of Weslaco, Texas, who has previously fought in San Antonio six times, Figueroa added to his family’s legacy by capturing the world title, joining his brother Omar Figueroa, who previously held the lightweight world championship.

“I’ve been waiting to get back in the ring to do what I love,” said Figueroa. “Carlos Castro is a great fighter and we both have to prove why we belong at the top of the 126-pound division. I can’t wait to fight in San Antonio in front of my fans, it’s really one of my favorite places to compete and I’m planning on giving everyone who comes out a great show like always.”

Castro (27-1, 12 KOs) was born in Sonora, Mexico and came to the U.S. as a child. Now living in Phoenix, Ariz., Castro most recently dropped a narrow split-decision against two-division champion Luis Nery in February, with one point on the cards ultimately holding Castro back from keeping his unbeaten record intact. The 28-year-old made his name as a 122-pound contender, but has also competed at featherweight, including a 10th round TKO victory over veteran contender Oscar Escandon in August 2021.

“I’m thrilled to be back in the ring,” said Castro. “I have some real business to handle against Figueroa on July 9. There’s no better fight for me to show that I’m back. I’m ready to show that I’m capable of being in the mix at the top of the division and to earn a shot at the title.”

The 27-year-old Martin (15-0, 11 KOs) rose up the lightweight rankings in 2021 with a pair of impressive victories before most recently delivering a New Year’s Day KO over Romero Duno. In 2021, Martin knocked out the previously unbeaten Jerry Perez in a dominating performance in April, before earning a unanimous decision over Ryan Kielczweski in August. Originally from Indianapolis, Ind., Martin now trains in the Dallas-area under the guidance of top trainer James alongside unified welterweight champion Errol Spence Jr.

“I’ve been training hard in Dallas and I’m just excited and ready to go,” said Martin. “Núñez is a boxer-puncher, so I expect him to mix it up with some fast combinations and to try and throw my movement off, but I’ll be ready for all of that. Fight fans are going to enjoy an action fight with this one. We’ve got the speed, power and athleticism to put on an exciting show on July 9.”

Representing La Chorrera, Panama, Núñez (23-3, 21 KOs) enters this fight with knockout victories in his last two fights, including most recently stopping Richard Solano in the first round in October 2021. The 28-year-old moved back up to lightweight for those two victories after challenging three-division champion Gervonta Davis in July 2019 for a 130-pound title. Núñez has fought professionally since 2010 and has a brother also named Ricardo who is a veteran pro fighter in the featherweight division.

“I’m very happy to be back in a big fight on July 9,” said Núñez. “You’re going to see a whole new fighter against Martin. I’m coming to fight and impose my style on my opponent. Martin is a good boxer who’s made it to a high level, but he still has to show what he’s made of. I’m going to give one hundred percent to stop his rise and be the first person to beat him.”

The 29-year-old Ellis (23-0, 14 KOs) returns to the ring for the first time since October 2020, having earned a unanimous decision over the previously unbeaten Alexis Rocha in his last outing. Originally from Lynn, Mass., Ellis also owns a pair of victories over veteran contender Eddie Gomez, including a first-round knockout over Gomez in December 2016, before winning by unanimous decision in their 2019 rematch. He takes on the Buenos Aires, Argentina native Palmetta (17-1, 12 KOs), who represented his home country at the 2016 Olympics before turning pro in November 2016. The 32-year-old has won his last 11 fights, with 10 coming by stoppage, including most recently defeating Yeis Solano in October 2021.

“I’m excited to be back in the ring on July 9,” said Ellis. “I want to thank my whole team, and I can’t wait to deliver fireworks for everyone watching this fight. I’m looking to steal the show and I’m training hard to make sure I do just that. You definitely want to tune in and see what I’m going to do in this one.”

“This fight is very special because it is the same day as Argentinian Independence Day,” said Palmetta. “Four years ago, I made the decision to leave my home and travel to the United States to further my boxing career. I want to face the biggest opponents, so I can earn the opportunity to become a world champion. This fight against Ellis is the big step I’ve been looking for. On July 9, get ready, because I’m coming with hunger, hard work, and determination. It hasn’t been easy for me; I have fought through the pain and struggle, and because of it, I remain humble and more motivated than ever.”

San Antonio’s Cardenas (20-1, 10 KOs) will look to run his current winning streak to nine when he competes in front of his hometown crowd on July 9. The 26-year-old added a pair of victories to his resume in 2021, having most recently stopped Marvin Solano in three rounds last August. He will be opposed by the 31-year-old Banquez (20-1, 14 KOs), who is originally from Venezuela and now fights out of Fort Lauderdale, Fla.. Banquez had a successful U.S. debut in January, as he stopped the previously unbeaten Joahnys Argilagos in six rounds, building off of a 12-round decision over the previously unbeaten Prince Patel in July 2019.