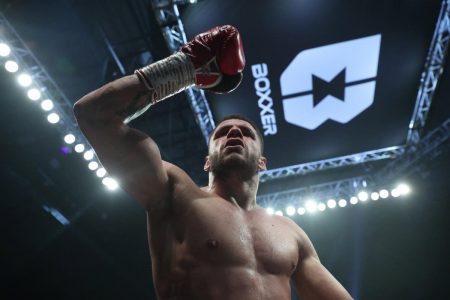 Florian Marku (12-0-1, 7 KO’s) made a triumphant return to his Albanian homeland on Thursday night, with over 12,000 fans packing the Tirana Air Albania Stadium to see him win a unanimous decision in the main event.

It was a gruelling war with Mexican opponent Miguel Parra, who had travelled to Albania intent on shattering Marku’s dreams and the crowd’s hopes. He very nearly accomplished that in the eighth round, putting Marku down with a left hook, only for the Albanian to shrug it off and return to the fray.

Marku scored a knockdown of his own in the fourth round only to suffer a cut moments later as the two boxers clashed heads. Unfazed, Marku battered Parra with hooks which sent his gumshield flying and made the fourth round one of the most dynamic of the fight.

Still undefeated, Marku’s record now stands at 13-0-1 and he now adds the Silver Welterweight Championship to his collection.

“[Fighting in Albania] was unbelievable. I want to thank everyone who is supporting me. The crowd is amazing, I wanted to perform much better than this, but I didn’t want an easy opponent for here,” he said afterwards.

“It was a good fight, I made some mistakes and made it harder than it was. I traded with him without reason and Mexicans come to fight. The cut was a problem because I couldn’t really see from my left eye. I started really good and the cut affected me a lot.”

As for his next opponent, Marku said he is open to all challenges.

“I don’t care – I will fight whoever they bring me,” he said.

Marku is part of the BOXXER stable, with BOXXER holding exclusive promotional rights for the explosive Albanian.