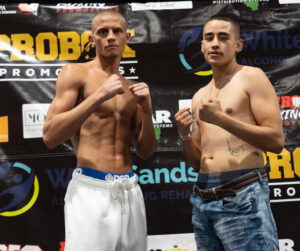 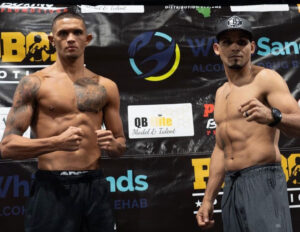 Whitesands Event Center in Plant City, Florida, USA 7/8/21
Brothers Marques and Dominic Valle weighed for bouts that will take place at the Whitesands Event Center in Plant City, Florida.
Marques and Dominic Valle of West Chapel, Florida, are managed by Split-T Management
Marques (2-0, 2 KOs) will take on Jimmy Rosario in a four-round welterweight bout; While Dominic (1-0, 1 KO) takes on 30-fight veteran Michael Gaxiola in a featherweight contest.
As an amateur, Marques  won Silver Medal at the 2018 Men’s Nationals as well as fighting in the 2020 United States Olympic Trials. He is coming off a 1st round stoppage over previously undefeated Leonidas Fowlkes (2-0) on March 12th.
Both Valle and Rosario checked in at 148.6 lbs.
Dominick won the 2016 National Silver Gloves and in 2018, he was a National Junior Olympics champion. He is coming off a successful pro debut when he stopped Juan Bryand in the opening round on March 12th.
Valle weighed 127.7 lbs. Gaxiola was 128.2.