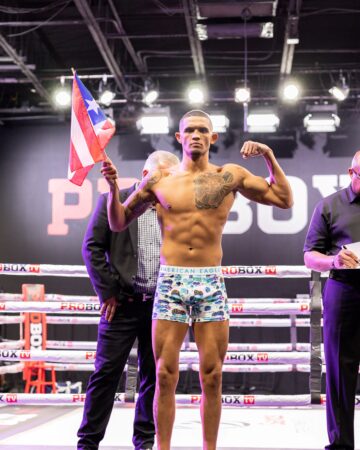 This past Friday night in Plant City, Florida, super welterweight Marques Valle remained undefeated with a disqualification win over Luis Midyael Sanchez in the second round of their scheduled six-round bout.

Valle is managed by Split-T Management.

Valle was dominant in the over the five-plus minute fight, to the point where Sanchez was constantly holding. Sanchez was deducted two points in the second round for his hugging. He did not get the message as he continued to grab Valle, and finally the referee saw enough and pulled the plug on the fight at 2:22.

Valle, who had his perfect knockout record stopped, is now 7-0 with six knockouts.

The 23 year-old native of Wesley Chapel, Florida is promoted by Pro Box Promotions.

Andy Dominguez, Urbina, Sims Jr at Sony Hall NYC on Dec. 21 Commonwealth title on the line for Azeez vs. Fielding on Dec. 17