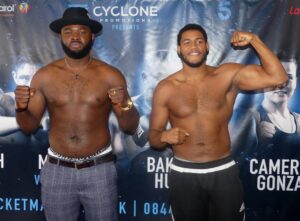 Having defeated Sergey Kuzmin on Saturday night, Bakole has switched his attention over to the fighter that inflicted his sole defeat, Michael Hunter.

Hunter KO’d Bakole on 13/10/18, and since his lone defeat he has won 5 in a row and now wants revenge against Hunter.

Bakole spoke to Matchroom after the Kuzmin win

“I want to thank god for this big victory. To be honest, I’m not happy. I didn’t work the way I was supposed to work. I did three weeks in the gym. We kept that a secret. I was not 100% fit. I won the belt and I’m now WBC International Champion.

“It was a tough fight. if you look at round 2, I was close to knocking him [out]. He survived because he’s a big guy. I needed to win this belt for my baby. I’m ready now. I’m in the top 10. I’m ready to face anybody. I’m going to see my family and then come back quickly to get in the gym to prepare for next year.

“I want anyone. I’m ready to face anyone. I’m not in this business to play around. I’m in this business to win and I have a belt now. I told Michael Hunter to watch this fight. My next one is going to be him! Michael Hunter, look at my eyes; let’s do it again. This time I will beat him, believe me. I made a mistake, and now I’ve fixed my mistakes. I’m improving, and he can see that himself.”