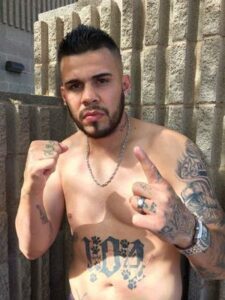 Veteran boxer Marvin “Much Too Much” Cordova, Jr (pictured above) and promising prospect Robert Daniels, Jr. (pictured below) are the latest additions to Ryan Roach’s growing Fighter Locker stable.
“Mr. (Jimmy) Burchfield (Cordova’s promoter) linked me up with Marvin,” Roach said. We had a few short conversations on the phone, and it just happened. Marvin is very passionate about the sport, and he’s read to show the worked he still has a lot left in his tank. He truly is a special fighter with a high-caliber resume including opponents like Victor Ortiz and Joselito Lopez. He has a great team around him now and we are really looking forward to getting him going.
“Robert is a great young man coming from a family just like mine. I am ready to get him going with a great trainer in Kevin Cunningham. I am proud to add him to the Fighter Locker team. He is really a talented fighter that had a few bad breaks early on in his career. He had managerial issues and so forth. Look for Daniels Jr. during the next year!”
The 36-year-old Cordova (23-2-1, 12), is a super middleweight from Pueblo, Colorado. A solid amateur who was a bronze medalist at the 2002 U.S. Under-19 and 2003 Police Athletic League, Cordova turned pro in 2014, but his pro career has been interrupted because spent 8 years in prison. He also defeated future pro world champion Daniel Jacobs
“I’m 36 but a young 36,” Cordova said. “I started boxing at 4. I had 242 amateur fights and was chosen as one of the top amateur boxers in the country. I spent 8 years in prison, and it made me a better person and hungrier fighter. I have some unfinished business to take care of. I really beat Joselito Lopez (Lopez won an 8-round decision). I hit him with a big shot in the sixth round, but they let him stay down for 4 minutes, claiming he was hit low.”
In his last fight this past January, Cordova captured the NBA super middleweight title by stopping 56-30-3 Hector Velazquez in round four, adding to his awards display case that also includes his Interim WBC Youth World, WBA NABA U.S. light welterweight, and GBU Youth light welterweight title belts.
“Ryan Roach believes in me,” Cordova noted. “I’m stronger and ready for the next step. I had talked with a friend, Jimmy Williams, about signing with a good manager. He told me Ryan was a good manager who loves his fighters and really cares about him. My promoter, ‘Mr. B’ (Jimmy Burchfield), hooked me up with Ryan. He calls to make sure I’m good and he can get me to the elite level once again.”
Daniels (4-0, 4 KOs) is the son of former WBA cruiserweight World champion Robert “Preacher Man” Daniels (49-10-1, 41 KOs), who became world champion in 1989, when he decisioned the future Hall of Famer Dwight Muhammad Qawi.
“There’s a little bit of added pressure as the son of a world champion boxer,” southpaw Daniels admitted. I’ve heard things like ‘he’s not going to be like his father, he doesn’t have what it takes to be world champion.’”
Now fighting out of West Palm Beach, Florida, Miami native Daniels is now trained by Cunningham. Managerial issues resulted in him fighting only four times as a pro during his nearly 5-year career.
“I was introduced to Ryan by my friend, Daniel Bailey (a member of Fighter Locker), and I believe Ryan can get me to a world title,” Daniels remarked. “The main reason I signed with Ryan is I like his personality. He’s easy to talk with and before I even signed with him, he reached out to me to see how things were going. And that’s a big reason why I did sign with him.
“I was supposed to sign with managers are few times, but it never went anywhere, and I wasn’t getting fights. I have this great opportunity now and I’m going to take full advantage of it.”
Fighter Locker’s growing stable of gifted boxers include California super flyweight Rocco “So Cal Kid” Santomauro (21-1, 6 KOs), Troy, NY ABF American West super lightweight Ray Jay “The Destroyer” Bermudez (12-0, 9 KOs), Toronto, Canada welterweight West Haven, CT super welterweight Jimmy “Quiet Storm” Williams (17-5-2, 6 KOs), super middleweight “The Amazing” Shawn McCalman (7-0, 4 KOs), U.S. Army super bantamweight Daniel Bailey, Jr. (5-0, 4 KOs), lightweight Leonel de los Santos (2-0, 2 KOs), a 2-time Dominican Republic Olympian, Boston featherweight Troy Anderson, Jr. (1-0, 1 KO), pro-debuting Dominican Republic welterweight Juan Solano, and Salt Lake City, 2016 Olympic silver medalist Yuberjen Martinez, Utah brothers, super lightweight Ignacio Chairez (8-0-1, 5 KOs) and lightweight Gabriel Chairez (3-0-1, 2 KOs).